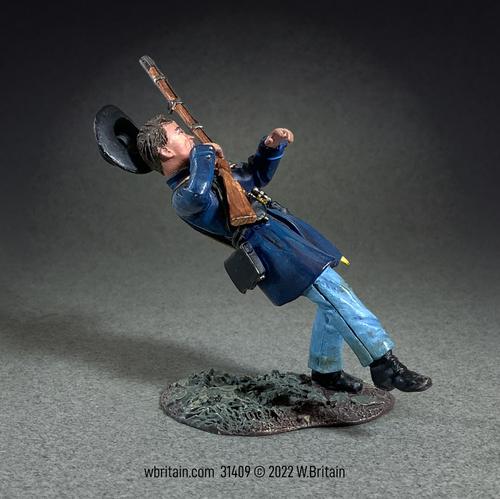 The Iron Brigade consisted of the 2nd, 6th, 7th Wisconsin, 24th Michigan, and 19th Indiana regiments--an all western brigade with a reputation of strong discipline and a tough-fighting tenacity exhibited throughout the entire American Civil War.  Scornfully referred to by Confederate soldiers as “Those Damn Black Hats”, the Iron Brigade fought in most of the eastern campaigns from 1862 onwards at famous battles such as Second Bull Run, Antietam, Fredericksburg, and Gettysburg, suffering horrific casualties along the way.  The Iron Brigade suffered the highest percentage of casualties of any brigade in the war.

Seen here is one such Iron Brigade Casualty falling in one of the major engagements they fought during the American Civil War.