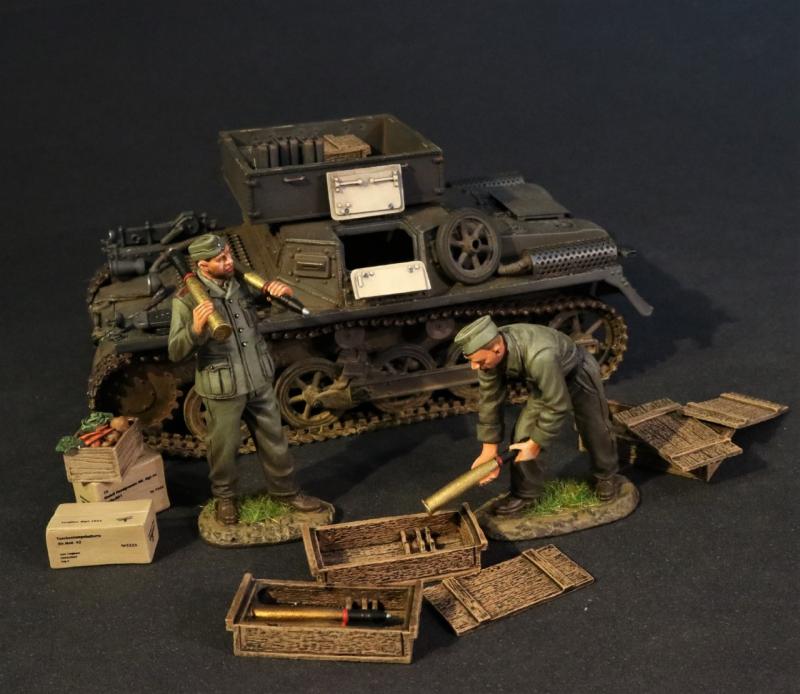 Two Crewmen for Panzer I Ausf. A Munitionsschlepper

In September 1939, fifty one Panzer I Ausf. A light tanks were removed from service and transformed by Krupp and Daimler into ammunition supply vehicles. These were intended to equip the panzer regiments front line tanks, with suitably adapted vehicles for supplying ammunition when possibly under fire.  These initial conversions involved removing the turret and providing a two-piece armour plate cover over the resulting opening.  These crude conversions mainly served in Poland and France with Panzer units.  In the spring of 1942, most of the surviving and already obsolete model I tanks were converted into load and ammunition supply vehicles.  For that purpose, plates were welded onto the superstructure replacing the turret, making a quadrangular box that could be covered by canvas for transport.  A few months later in early 1943, the order was given to transform all the remaining panzers into ammunition carrier tractors. These vehicles had their turrets removed and many of these turrets were used to arm bunkers and permanent strongholds, particularly on the Atlantic Wall.