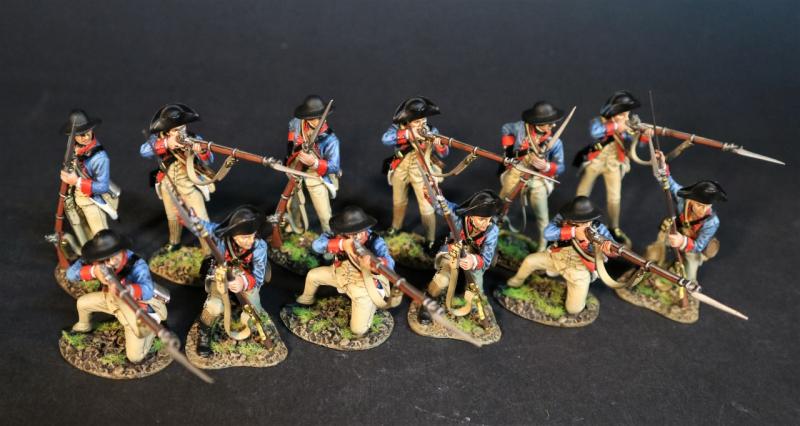 The Continental Army consisted of soldiers from all 13 colonies and, after 1776, from all 13 states.  When the American Revolutionary War began at the Battles of Lexington and Concord on April 19, 1775, the colonial revolutionaries did not have an army.  Previously, each colony had relied upon the militia, made up of part-time citizen-soldiers, for local defense, or the raising of temporary "provincial regiments" during specific crises such as the French and Indian War of 1754–63.  As tensions with Great Britain increased in the years leading to the war, colonists began to reform their militias in preparation for the perceived potential conflict. Training of militiamen increased after the passage of the Intolerable Acts in 1774.  Colonists such as Richard Henry Lee proposed forming a national militia force, but the First Continental Congress rejected the idea.

The Continental Army of 1777–80 evolved out of several critical reforms and political decisions that came about when it became apparent that the British were sending massive forces to put an end to the American Revolution.  The Continental Congress passed the "Eighty-eight Battalion Resolve", ordering each state to contribute one-battalion regiments in proportion to their population, and Washington subsequently received authority to raise an additional 16 battalions.  Enlistment terms extended to three years or to "the length of the war" to avoid the year-end crises that depleted forces (including the notable near-collapse of the army at the end of 1776, which could have ended the war in a Continental, or American, loss by forfeit).

Flags or colors which belonged to the 2nd NH were captured at Fort Anne in July 1777 during the retreat from Fort Ticonderoga.  After more than a century, they were returned from Britain, and are on display today at the Tuck Library of the New Hampshire Historical Society in Concord.  They are among the only American battle flags from the Revolutionary War known to exist.  The colors containing the motto "The Glory Not the Prey" are marked "2nd NH Regt", while the other colors captured at the time, the linked 13 rings, were likely a type of national color.  Two other flags captured by the British at Skenesboro were also noted and they had similar designs, especially another with the 13 linked rings.  While their colors were lost, the 2nd New Hampshire fought bravely in the autumn of 1777, where they were heavily engaged with British forces at Saratoga, leading to the surrender of General John Burgoyne's army.