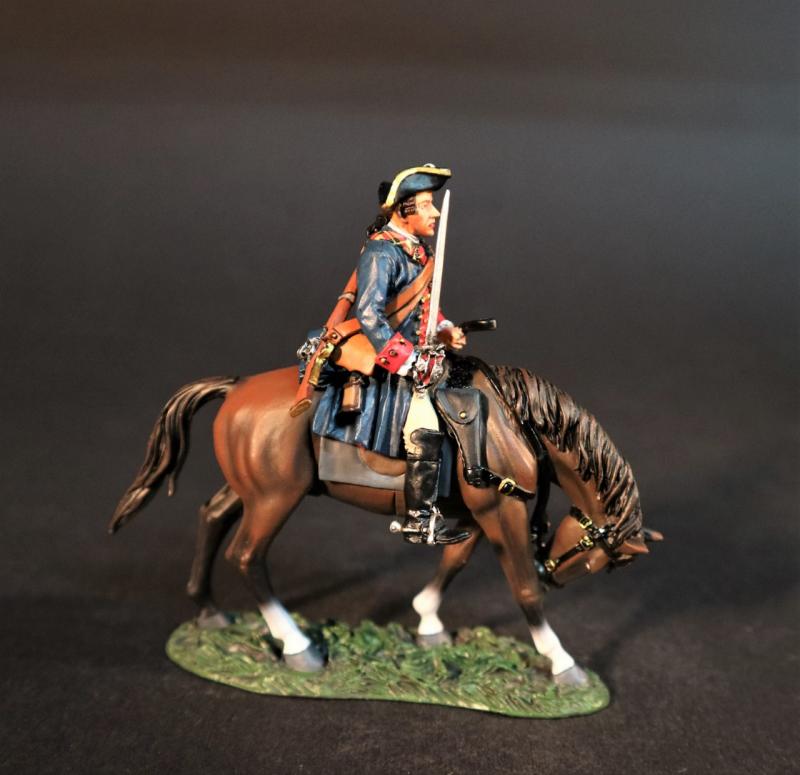 It is argued that despite being depicted as horseless troopers standing forlornly in the rear at Culloden, the Jacobite cavalry were regarded when it came to scouting as superior to their regular opponents.

All of the Jacobite cavalry units remained mounted throughout the campaign, except for Kilmarnock’s and Lord Pitsligo’s who turned their horses over to the newly arrived Fitzjames Cavallerie in March 1746, and were then re-organized as a regiment of foot guards.

The cavalry, with the exception of the single troop of Hussars, were organized into two troops, and were over-officered to an even greater degree than the infantry.

Charles had a mounted Lifeguard unit from early on in his campaign.  It eventually grew to be one of the larger cavalry units.  Most of the recruits were young men drawn from the “society” of Dundee and Edingburgh, with many being sons of gentlemen. One troop of around 100 men was commanded by Lord Elcho, and another of 40 men by Balmerino. Unlike nearly all the other Jacobite units, the Lifeguards had an elaborate formal uniform, which were blue coats with red facings, laced waistcoats and a tartan sword belt.

The blue coats turned with red, cocked hats, and laced waistcoats as well as the famous tartan belts are based on a description contained in a letter written in Leith shortly after Culloden which stated that, “the pretender’s lifeguard, have suffered greatly… 26 lying in heap with the lace cut of their coats and their tartan belts lying beside them”.  The blue coats are believed to be of French origin, and had probably been some of the military supplies carried to Scotland on the “Le Du Teillay”

Tracing the movements of this unit at Culloden is complicated by the fact that while the greater number stood on the right under Lord Elcho, and helped defend that flank against Hawley’s dragoons, another smaller troop led by Lord Balmerinoo may have served on the left wing brigaded with what remained of Lord Strathallan’s Horse.  Of course, a small detachment formed part of the Pretender’s bodyguard under the command of Captain Shea, an officer in Fitzjames’s Horse.

The Prince raised the Stuart standard at Glenfinnan, west of Fort William on the Scottish mainland, on 19th August 1745, which was the official signal that the Jacobite rising had begun.