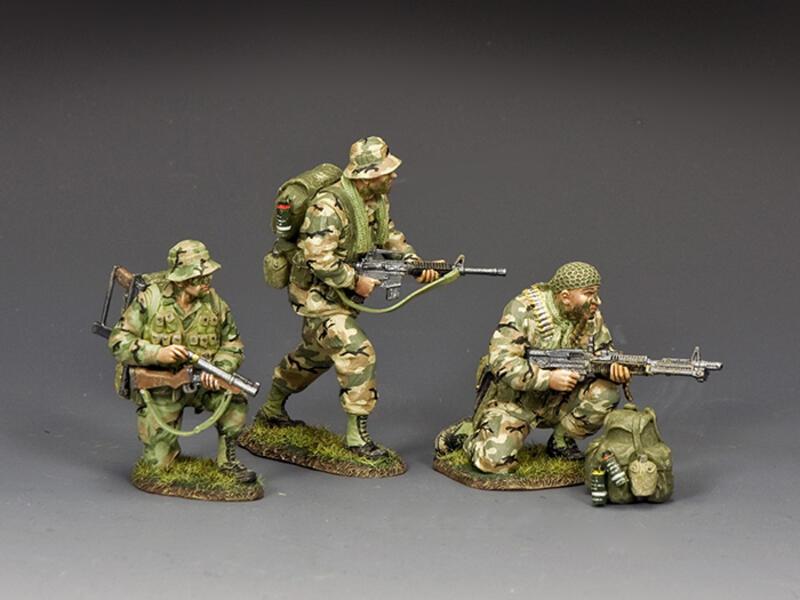 This trio of Special Forces soldiers are ‘armed and very dangerous’!  The ‘Team Leader’ moves cautiously forward carrying an M16A2 Assault Rifle, an updated and upgraded version of the standard U.S. Army M16A1, usually only distributed to Special Forces.  He is dressed, in the then new ERDL* Pattern camouflage which was only issued to elite reconnaissance and special operations units in early 1967.   The kneeling ‘Grenadier’ is loading his M79 Grenade Launcher, backing this up is his personal weapon, a ‘Swedish K’, 9mm submachinegun.  Completing the ‘trio’ is the heavy firepower of the crouching M60 machine gunner festooned with belts of 7.62mm ammunition.  He also carries the M1911 Colt Automatic Pistol alongside his ‘K bar’ fighting knife.  His backpack sits in front of him.  These last two S.F. troopers are also wearing the newly-introduced ‘ERDL Camo’ suits.

*Engineer Research & Development Laboratories, a branch of the U.S. Army.