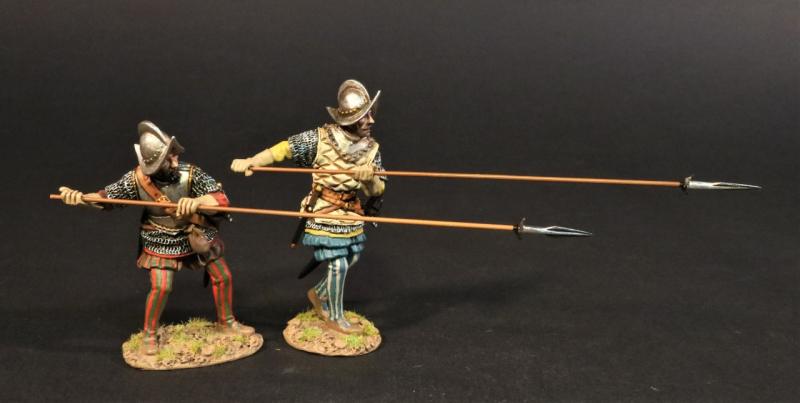 From the moment of Christopher Columbus' discovery of lands previously unknown to Europe in 1492, the New World captured the imagination of European adventurers.  Thousands of men came to the New World to seek fortune, glory, and land. For two centuries, these men explored the New World, conquering any native people they came across in the name of the King of Spain (and the hope of gold). They came to be known as the Conquistadors.

The Spanish army of the sixteenth century had been forged through the Reconquista of the Iberian Peninsula by Ferdinand and Isabel who succeeded in overthrowing Granada in 1492, the last European Islamic state. This was mainly achieved by arming the citizenry and forming militias, something which was unthinkable in neighboring countries like France, where the elite class assured its survival by restricting the right to bear arms and armour.

The Spanish armies were therefore feared throughout Europe. Their pikemen and halberdiers thought nothing of dragging the flower of European nobility from their horses, allowing gunners to run their matchlocks up into their armour and literally blasting the helpless knights to pieces.  By 1500, the Spanish citizen soldier had become the most efficient killer Europe had seen since the Roman legionaries.

In European battles since 1500, the Spanish armies adopted to fight in coordinated units of equal numbers of gunners/crossbowmen, pikemen, and swordsmen.  First, the Spanish gunners and crossbowmen shot massed volleys into the enemy pike phalanx, whilst the Spanish pikemen supplied a “hedgehog” defence.  The gaps resulting from the concentrated fire were then exploited by the heavily armoured swordsmen who dashed forward in packs to hack at the helpless pikemen, whose pikes were basically useless in such close quarter combat.  The combination was unbeatable, and would serve the Spaniards equally as well against the echelons of Aztec troops.

The primary weapons of the Conquistadors included swords, crossbows, matchlocks, and, to a lesser extent, pikes.  The crossbow was important, as it was easy to manufacture and more reliable than the matchlocks especially in the humid tropics of Mexico and central America.

The Pike was extremely important to the Spanish armies.  Even though the Aztecs possessed no cavalry, the Aztec armies tended to fight in large dense formations of light infantry and the primary danger for the Conquistador was being surprised and over run before they could bring their superior combinations of weapons to bear on their Aztec opponents.  Pikes were therefore used to keep the massed ranks of the enemy at a distance, whilst the guns and crossbows inflicted their terrible damage.  Swordsmen could then deal with any enemy that broke through.