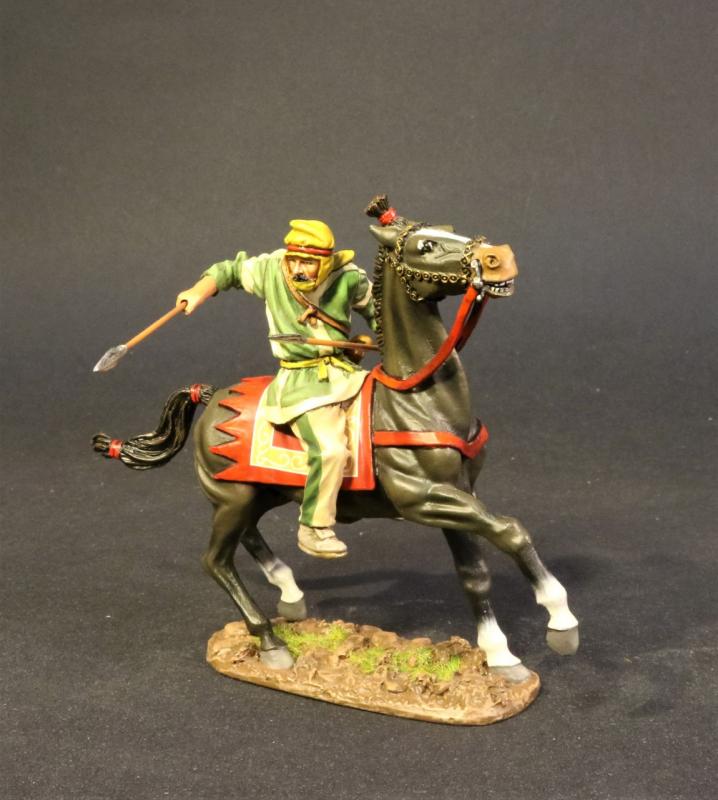 Persian Cavalry Set 2B (yellow and green-striped clothes), The Achaemenid Persian Empire, Armies and Enemies of Ancient Greece and Macedonia

In the 6th and early part of the 5th century BCE, Persian horsemen, heavily influenced by the Scythians, were armed with bows and javelins, and fought as light cavalry.

In the second half of the 5th Century, there was an increase in armoured cavalry, armed with spears (palta) for thrusting and throwing, and the virtual disappearance of cavalry archers.  The change and development can be directly linked to the wars against the Greek armies in the west.

These horsemen usually carried two palta, made from cornel wood.  One could be thrown, and the other used for thrusting.  The cornel wood spears were also stronger than the Greek spears, and Xenophon describes an encounter between Greek and Persian cavalry in 396 BCE when the Persians fought successfully with their palta, while the Greek spears broke too easily.

Later developments were to occur, when the Persians faced Alexander the Great’s Macedonian cavalry.  The long Macedonian thrusting spear (also made from Cornel wood) had a big advantage over the shorter Persian thrusting spear, which is one of the reasons for the Macedonian success at the Graneikos.

Darius III, in the preparations for Gaugamela, tried to equip more of his cavalry with longer spears, or Macedonian style lances and adopt much heavier armour, including partial armour for the horses.