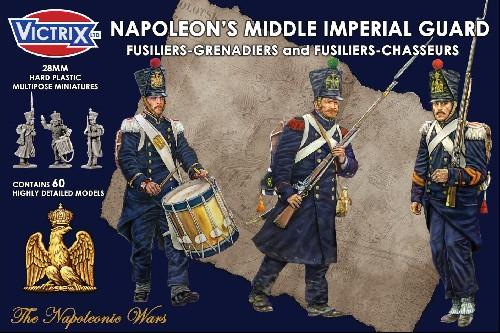 The set contains 60 superbly detailed miniatures with pose options to make march-attack, advancing and firing line. There are also various figure options for officers, standard bearers and drummers. These figures represent Napoleons Middle Guard, the Fusiliers-Grenadiers and Fusiliers-Chasseurs. They were every bit as effective as their Old Guard counterparts and experienced a lot of action during the 1812 campaign, the 1813 campaign, and struggled heroically during the defence of France in 1814.  Not only can this set be used to make the Middle Guard, it can also be used to make Line Grenadiers and Voltigeurs as well as Leger.

Figures are 28mm sized, supplied unpainted, and made of plastic.