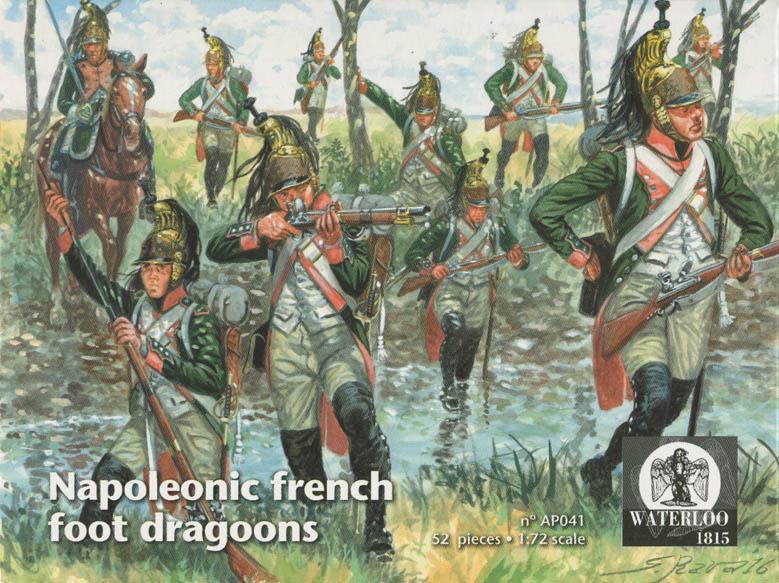 Dragoons had started life as mounted infantry, and had spent decades trying to become accepted as true cavalry, a more highly regarded branch of the army. On the whole they had succeeded by the Napoleonic Wars, but in the French Army their dismounted role remained important, so at any time they might have to fight on foot. However there was a major problem in supplying horses for the dragoons, since the other branches of the cavalry were ahead of them in the queue, and animals were often in very short supply. At various times during the Wars numbers of dragoons were made into 'foot dragoons', essentially taking away their horses and making them a form of infantry. This greatly displeased the men concerned, and they performed the role with ill grace by all accounts. Such foot dragoons were generally a temporary expedient, and would eventually be remounted using captured enemy stocks of horses.

The uniform of the dragoons did not change a great deal throughout the period, but these men all wear the habit coat, which remained almost the same until the habit-veste of 1812. More specifically, they have possibly genuine turnbacks on the long tails, with a triangular patch at the end that stopped manufacture in 1810, although like any uniform change could have been worn for years after. As foot dragoons the differences were that the men replaced their high boots with infantry gaiters reaching to above the knee, and were given knapsacks. Both these distinctions are shown on every figure here, so these are specifically foot dragoons, rather than simply dragoons momentarily on foot. Their helmets, with the horsehair mane, are well done here, as is all of the uniform, which is completely correct.

The kit is the dragoons straight sabre, bayonet, cartridge pouch and knapsack with rolled greatcoat or blanket. The sword and bayonet were as per their mounted colleagues, but a few look like they have been sculpted as the combined frog of the infantry. However others clearly are not done this way, so this seems to be just a coincidence. The only issue is with the cartridge pouches, which in some cases have an intricately done eagle badge on them. This would date them to 1804 or after, but is in any event incorrect for dragoons, mounted or not. However this is easily removed, or simply ignored when painting.