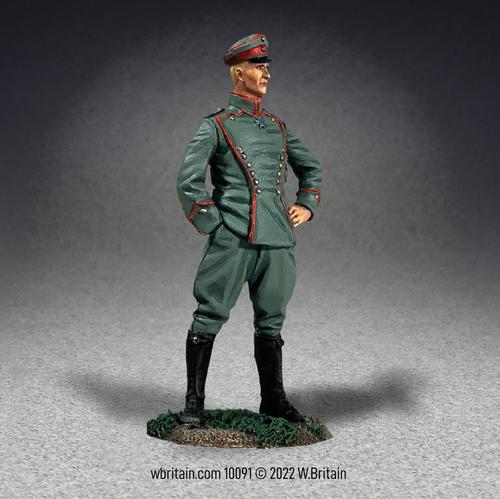 Known by his English adversaries as the Red Baron, Manfred von Richthofen was the leading German fighter pilot during World War I.  Officially credited with 80 aerial combat victories, he is considered the ace-of-aces from either side.  A Prussian aristocrat, Richthofen started the war as a cavalry captain (Rittmeister), but mounted troops were obsolete in the age of the machine gun and he was granted a transfer into the German Army Air Service.  He was not an overtly risky or aerobatic pilot, but rather a studied tactician and fierce marksman.  In 1917, he took command of Jasta 11 fighter squadron, which was comprised mostly of elite German pilots.  He flamboyantly painted his entire aircraft red.  His men followed suit marking their planes with splashes of color as well – and the Flying Circus was born.