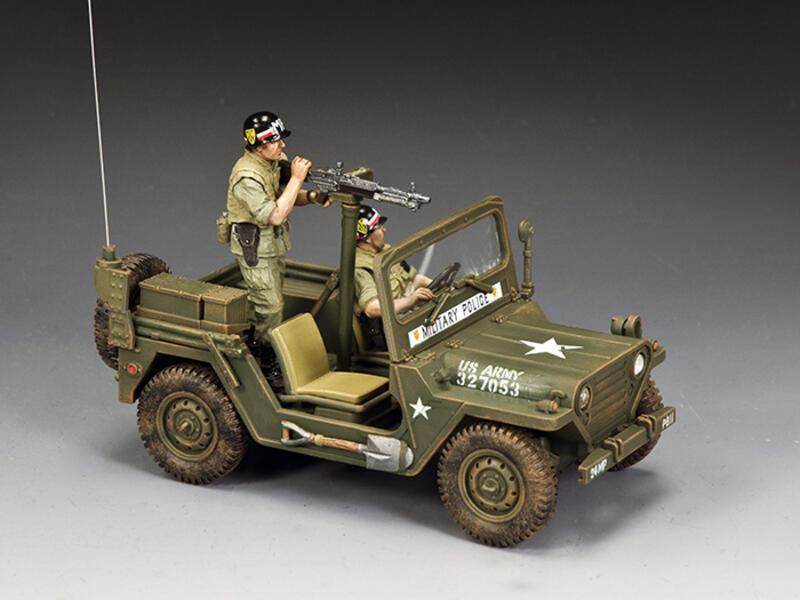 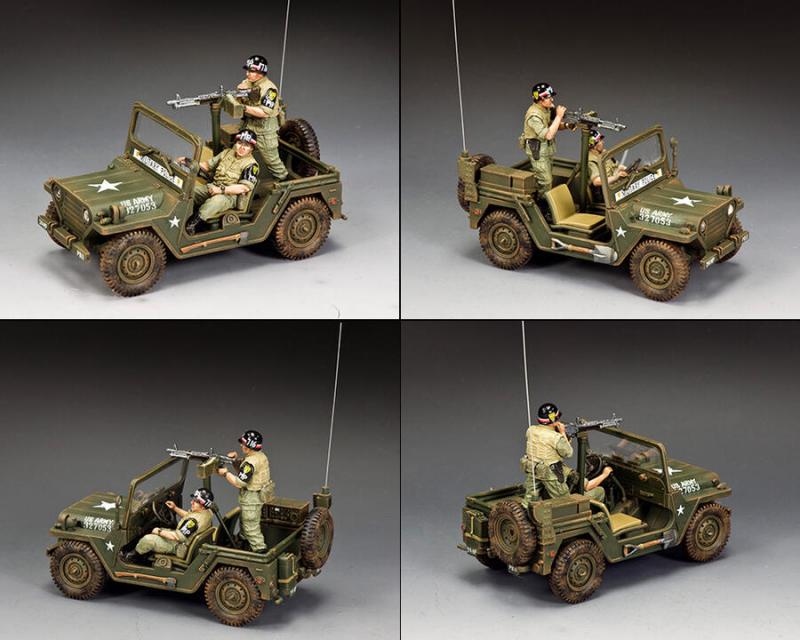 A very visible presence on any Saigon street or indeed any large South Vietnamese town or city where American troops were stationed.  This particular MP vehicle is clean and well-maintained and again has a two-man crew comprising a sitting driver behind the wheel and a standing Military Policeman wearing the MP brassard and suitably-painted helmet in charge of the M60 machine gun.  Both men belong to the 716th Military Police Battalion whose primary mission was providing security and law enforcement in the Saigon/Cholon/Tan Son Nhut metropolitan area.  In addition, they guarded the US Embassy, the MACV (Military Assistance Command Vietnam) headquarters and other critical U.S. facilities throughout the city.  All members of this unit were heavily engaged during the ’68 TET Offensive and suffered a number of fatalities.  Our model depicts these MPs on regular vehicle patrol prior to the surprise attack.

One of the most iconic American-made vehicles associated with the Vietnam War was the M151 Military Utility Tactical Truck better known to the troops who used it as… The ‘Mutt’.

In production from 1959 until 1982, it saw plenty of active service with all branches of the U.S. Armed Forces operating in South Vietnam as well as the ARVN (Army of the Republic of Viet Nam).  As the worthy successor to the Korean War M38, it utilized a monocoque design making it more spacious than previous jeep designs and, in addition, incorporated an independent suspension with coil springs.  Apart from these improvements, the ‘Mutt’ did not feature the jeep’s distinctive seven vertical-slot grille opting instead for a horizontal-style grille.  Even though slightly larger than WWII and Korean War jeeps, it was still able to fit inside the CH53 ‘Chinook’ heavy lift transport helicopter.  Phased out of U.S. Military today, M151s can still be seen in the Armed Forces of Israel, the Philippines, Denmark, and over 100 other countries worldwide.