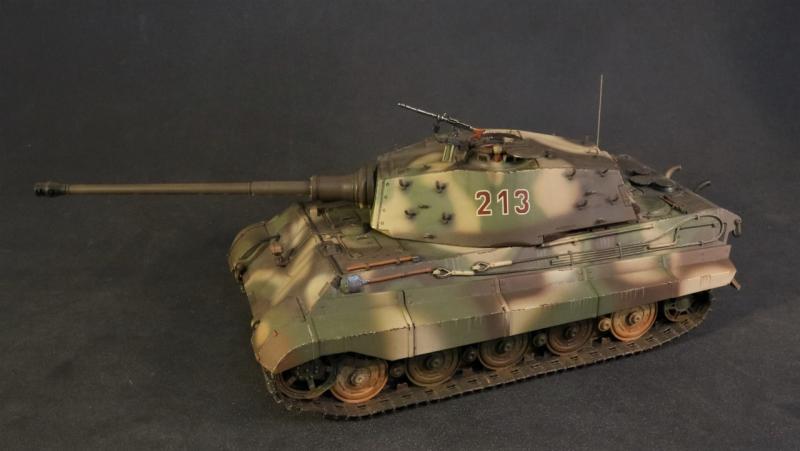 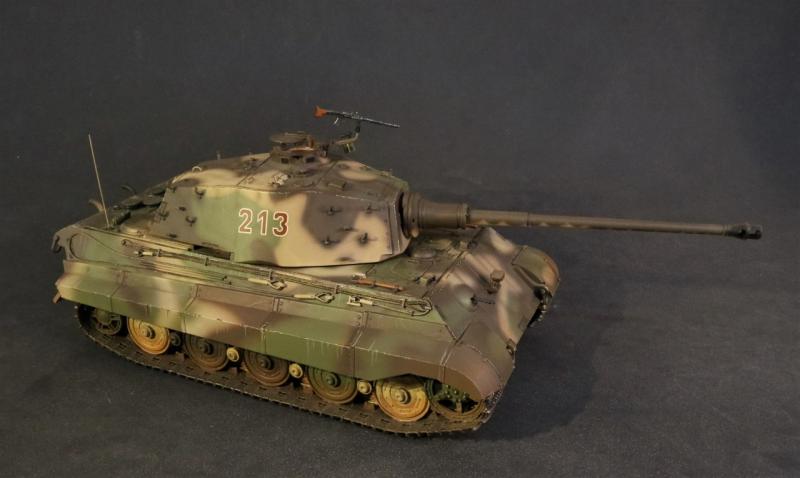 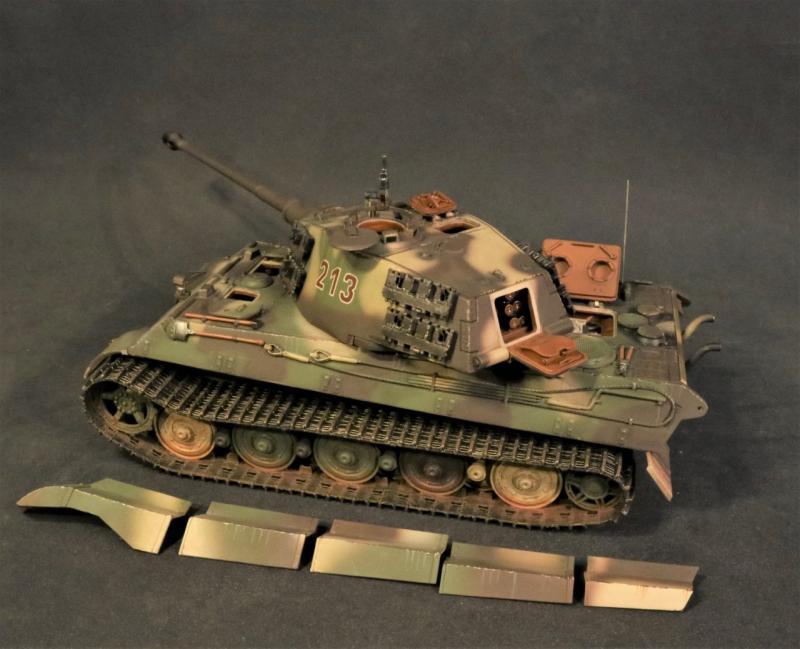 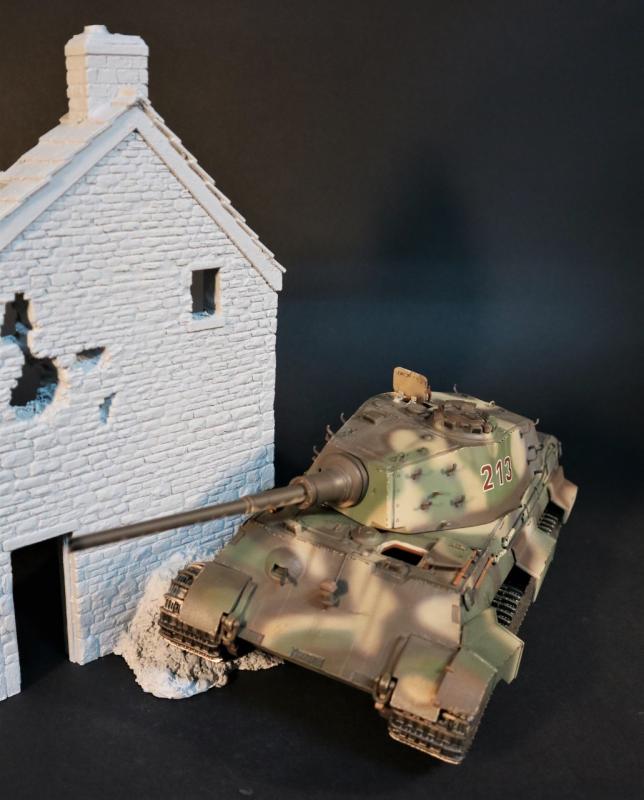 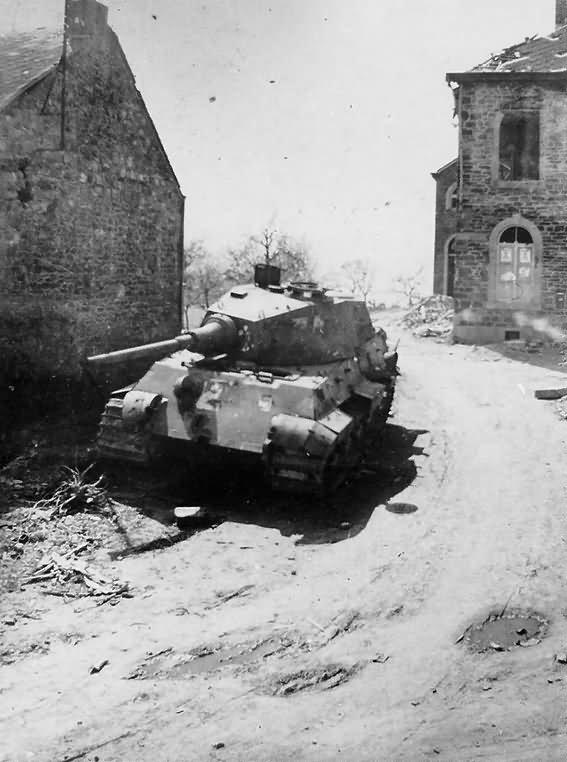 The Panzerkampfwagen VI Ausf B. Tiger II, commonly referred to as the King Tiger, was the successor to the legendary Tiger I heavy tank.  It was designed to be even more heavily armed and armored than its iconic predecessor.  Like the Panther tank, it incorporated design improvements gleaned from combat experience on the Eastern Front.  The King Tiger was armed with the finest tank gun of WWII, the dreaded long barreled 8.8 cm KwK. L/71.  Coupled with excellent sighting optics, this cannon was capable of destroying any Allied tank with ease, while it's well sloped armor provided excellent protection.  In fact, German armaments officials during the war stated the King Tiger's front profile was impervious to all Allied weapons and there is no evidence that the King Tiger's 150mm thick glacis plate was ever penetrated in combat.  To defeat the King Tiger, Allied tanks would have to outflank it in order to take shots at its weaker side and rear armor.  In the hands of a skilled crew, the King Tiger was a fearsome opponent.

This massive armament and extremely thick armor came at the price of weight, and at almost 70 tons the King Tiger was the heaviest production tank of World War Two.  Due to engine technology limitations of the time, the King Tiger was underpowered, since it used the same 750 horsepower Maybach HL 230 engine found on the much lighter Tiger I and Panther tanks.  Additionally, the massive weight of the King Tiger put enormous strain on engines, gears, and drivetrains and led to early malfunctions and teething problems.  Often, these issues were exasperated by inexperienced drivers (with only days or a few weeks of training) who did not adhere to engine limitations.  Contrary to popular belief, though, the King Tiger was no lumbering behemoth.  Once combat experience was gained, mechanical improvements were implemented and by the end of the war, the operational availability rate of King Tigers was on par with the Panzer IV and actually better than the Panther.  Furthermore, post-war testing showed the King Tiger displayed similar maneuverability to the Panther and Panzer IV and was actually more maneuverable than many Allied tanks.

Ultimately, too few King Tigers were produced to affect the outcome of the war, but the King Tiger remains one of the most deadly tanks of World War Two.

This model represents King Tiger #213 of schwere SS-Panzerabteilung 501 (s.SS-Pz.Abt 501) as it appeared during Unternehmen Wacht am Rhein (Operation Watch on the Rhine), commonly referred to as the Battle of the Bulge.  King Tiger #213 was attached to Kampfgruppe Peiper, the spearhead battlegroup of the 1. SS-Panzer Division "LSSAH", Hitler's bodyguard unit that was personally chosen by him to lead his last great offensive in the West.  Initially commanded by Unterscharführer Paul Tomke, King Tiger #213 was taken over by Obersturmführer Dollinger and used as a platoon command tank on Kampfgruppe Peiper's mad dash to reach the Meuse river.  King Tiger #213 ended up surrounded at La Gleize with the rest of Peiper's troops.  Making its last stand in La Gleize, it fought 15 U.S. tanks from the 3rd Armored Division until its cannon barrel was shot off and was ultimately destroyed by American tank fire after Dollinger and his crew abandoned the tank.  Escaping on foot with the rest of Peiper's surviving men, Dollinger was later killed fighting in Hungary with s.SS-Pz.Abt. 501.

Following the battle, King Tiger #213 was bought by Madame Jenny Geenen-Dewez.  The price...a bottle of Cognac!  The monstrous tank was moved to the center of Le Gleize, where it was later restored; its shot off cannon being replaced with a part of a Panther tank's barrel.  Today, the restored King Tiger #213 stands in front of the December 44 History Museum in La Gleize, dedicated to preserving the history of the Battle of the Bulge.

King Tiger #213 features a historically accurate "soft edge" factory tri-camo pattern along with the dark red turret numbers used by the 2. Kompanie of s.SS-Px.Abt. 501.  It is incredibly detailed with the following features:

- all hatches are fully operable and both open and close
- fully detailed turret interior and driver's crew compartment
- fully detailed and opening engine compartment
- removable side mudguards that can be individually attached to allow maximum display possibilities
- an additional "blown off" cannon barrel to display King Tiger #213 as it appeared in La Gleize, Belgium
- removable track links to attach to the side of the turret
- adjustable cupola mounted anti-aircraft machine-gun with historically correct armor sleeved MG-34

GA-51 comes with a second damaged gun barrel.  The building will not be produced.

DUE TO THE COVID ISSUES IN CHINA BACK IN 2020, THERE ARE ONLY A SMALL, LIMITED NUMBER OF THESE KING TIGERS AVAILABLE.  THERE ARE ONLY ENOUGH GA-51 SETS TO SUPPLY EACH DEALER WITH ONE MODEL ONLY.