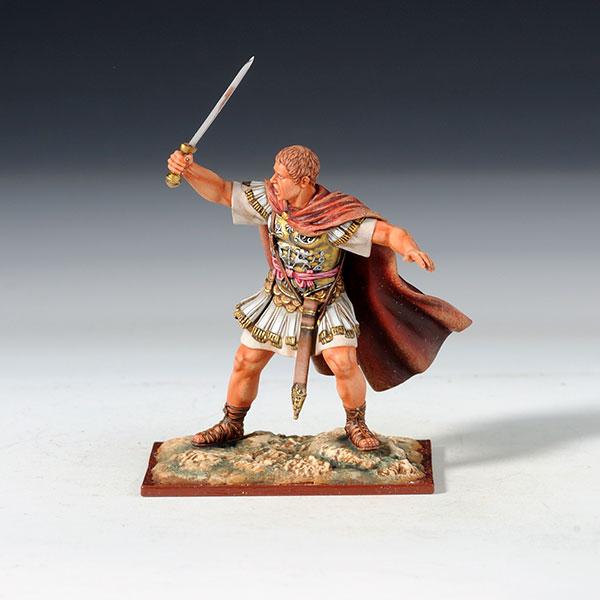 Julius Caesar with Sword at Munda

Born to the patrician and ancient Julia family, Gaius Julius Caesar, general politician, statesman, orator and writer, laid the foundations of the Roman Empire and was perhaps the greatest general in all of history. Julius’ uncle, General Gaius Marius, who had reorganized the Roman army before his death in 86 BCE, was the model enemy of dictator Sulla who ruled Rome.
Julius Caesar, as a close relative of Gaius Marius, was sufficient cause for his name to be included on Sulla’s death list.  As a result, Caesar and his family were forced to flee Rome.  Eventually, Sulla agreed to spare Caesar’s life at which time Caesar joined the Roman army.  He served with great distinction in the legions in Asia, earning recognition for his heroism.
Caesar subsequently held a variety of political and religious posts before becoming a political governor in 62 BCE.  His political fortune coalesced when he formed a three-sided alliance with the powerful general Pompey and magnate Crassus, the wealthiest man of Rome.  These three men controlled the Senate.  Caesar was elected Consul.
Caesar next arranged another governorship for himself, Cisalpine Gaul.  Transalpine Gaul was subsequently added to his territory.  Leadership of this vast area came with a substantial army.  During the years 58 BCE and 57 BCE, Caesar dealt with control of the warring Celtic tribes and expanded his growing army.  In 57 BCE, Caesar launched a full-scale conquest of the Gallic heartland.  Caesar dealt with Germanic resistance in the Rhine River area in 56 BCE-52 BCE as well as advances into Britain including revolts by Ambiorix and Vercingetorix in Gaul.
While Caesar’s military successes were legendary, the collapse of the Triumvirate in 50 BCE caused considerable problems for Caesar.
Pompey the Great in the Senate in Rome demanded that Caesar disband his army.
Caesar responded by crossing the Rubicon and marching on Rome.  This act by Caesar partly initiated civil war.  Pompey and most of the Senate fled Rome and retreated to Greece, leaving Rome and Italy to Caesar.
In 49 BCE, Caesar marched his army in pursuit of Pompey.  In 48 BCE, the armies of Caesar and Pompey met at Dyrrhachium on the Adriatic Coast.  Pompey was defeated and retreated inland in Greece to Pharsalus where the two armies once more clashed.  Again Caesar won the day and Pompey fled to Egypt.  Caesar pursued Pompey to Egypt only to find that Pompey had been murdered by the Egyptians.
Caesar remained in Egypt for a year taking Queen Cleopatra as a lover and aiding in her civil war, triumphing over her brother King Ptolemy XIII. She was installed as Queen of Egypt in 47 BCE.
In 46 BCE, Caesar resumed his war against Pompey’s sons, allies, and supporters.  Caesar defeated remaining units of Pompey’s armies in Africa and finally in Munda, Spain in 45 BCE.
Returning to Rome in 45 BCE in triumph, Caesar was named Dictator for life.  In 44 BCE, a small group of senators including Brutus, the son of Caesar’s mistress, assassinated Caesar.  The assassins thought they had removed an unwanted tyrant.  The public and Caesar’s allies thought otherwise, and the killers were forced to flee Rome.
The pursuit and retribution against the assassins as well as formal acknowledgment of the rule of Caesar’s designated heir, Octavian (Augustus), took several years.
For 2000 years, Caesar’s life, battles, friends, foes, and journals have been studied and analyzed.  He was clearly ‘bigger than life’.