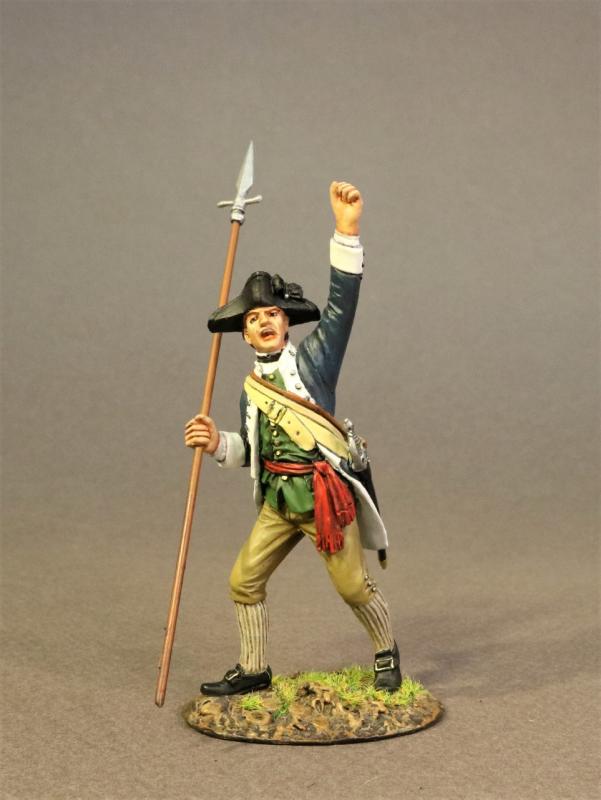 “The surrender that changed the world”.

In October 1777, a 6,000 strong British army surrendered in defeat after the American victory at the Battles of Saratoga.
For the first time in history a British General surrendered his sword
The German mercenaries were firing steadily from their redoubt.
From the rear came the crack of rifles.  A general mounted and, his sword flashing, led the riflemen into the redoubt.  German resistance collapsed.  The Battle of Saratoga was over.

The day was Oct. 7th, 1777. Twelve days later, “Gentleman Johnny” Burgoyne, the gifted, courageous British commander, surrendered to the American general, Horatio Gates.  Thus ended the most ambitious and dangerous offensive launched by Britain in the Revolution.  The attack on the redoubt was the last of a series of actions that constituted the Battle of Saratoga, considered the turning point of the Revolution.

The rifle fire that decimated the Germans awoke echoes around the World.  The French court, friendly to any who fought their ancient British enemy, finally was convinced that France’s interest lay in entering the war on the side of the Americans.

American forces, led by General Benedict Arnold, managed to take the Breymann Redoubt, which gave them a strong position behind the British lines.  The loss of the Redoubt rendered the British position untenable.  The British Army was forced to pull back to the river, from which position they would attempt to retreat north the next morning.

The Continental Army consisted of soldiers from all 13 colonies and, after 1776, from all 13 states.  When the American Revolutionary War began at the Battles of Lexington and Concord on April 19, 1775, the colonial revolutionaries did not have an army.  Previously, each colony had relied upon the militia, made up of part-time citizen-soldiers, for local defense, or the raising of temporary "provincial regiments" during specific crises such as the French and Indian War of 1754–63.  As tensions with Great Britain increased in the years leading to the war, colonists began to reform their militias in preparation for the perceived potential conflict.  Training of militiamen increased after the passage of the Intolerable Acts in 1774.  Colonists such as Richard Henry Lee proposed forming a national militia force, but the First Continental Congress rejected the idea.
The Continental Army of 1777–80 evolved out of several critical reforms and political decisions that came about when it became apparent that the British were sending massive forces to put an end to the American Revolution.  The Continental Congress passed the "Eighty-eight Battalion Resolve", ordering each state to contribute one-battalion regiments in proportion to their population, and Washington subsequently received authority to raise an additional 16 battalions. Enlistment terms extended to three years or to "the length of the war" to avoid the year-end crises that depleted forces (including the notable near-collapse of the army at the end of 1776, which could have ended the war in a Continental, or American, loss by forfeit).

Three of the Continental Army units which took part in the assault on the Breymann Redoubt, were the 2nd Massachussetts, the 2nd New York, and the 1st Canadian Regiment.

THE 2nd MASSACHUSETTS REGIMENT
The 2nd Massachusetts Regiment (Bailey's Regiment) was formed by consolidating the remnants of the 7th Continental Regiment; Peters' Company, 13th Continental Regiment; and Clap's Company, 21st Continental Regiment; with the remnant of the 23rd Continental Regiment. (Peters' and Clap's Companies were reorganized, respectively, as Warren's and Dunham's Companies, Bailey's Regiment). The commanding officer, Colonel John Bailey, had been the lieutenant colonel, later the colonel, of Thomas's Regiment in 1775 and colonel of the 23rd Continental Regiment in 1776. As the 23rd Continental Regiment, reorganizing as the 2rd Massachusetts Regiment, it served in Glover's Brigade at Princeton. Reorganization was completed in the spring of 1777, and the regiment was ordered to the Northern Department. In the summer of 1777 it was assigned to the 4th Massachusetts Brigade under Brigadier General Learned. The regiment retreated toward Saratoga after the American evacuation of Fort Ticonderoga in July and marched under Arnold to the relief of Fort Stanwix in August. Following the Saratoga campaign, the regiment marched south to join Washington in the Middle Department. It served in the Philadelphia campaign and wintered at Valley Forge. In 1778 it served in the Monmouth campaign. After November 1778 the regiment was stationed in the Highlands, but in 1781 its light company was assigned to Lieutenant Colonel Elijah Vose's Battalion, Corps of Light Infantry, which served in the Yorktown campaign. The regiment was disbanded at West Point, New York, on November 3, 1783.
The size of the Massachusetts Line varied from as many as 27 active regiments (at the outset of the war) to four (at its end). For most of the war after the Siege of Boston (April 1775 to March 1776) almost all of these units were deployed outside Massachusetts, serving as far north as Quebec City, as far west as present-day central Upstate New York, and as far south as Yorktown, Virginia.
Massachusetts line troops were involved in most of the war's major battles north of Chesapeake Bay, and were present at the decisive Siege of Yorktown in 1781. General officers of the line included Major Generals Artemas Ward, William Heath, and Benjamin Lincoln, and Brigadier Generals John Glover and John Nixon.