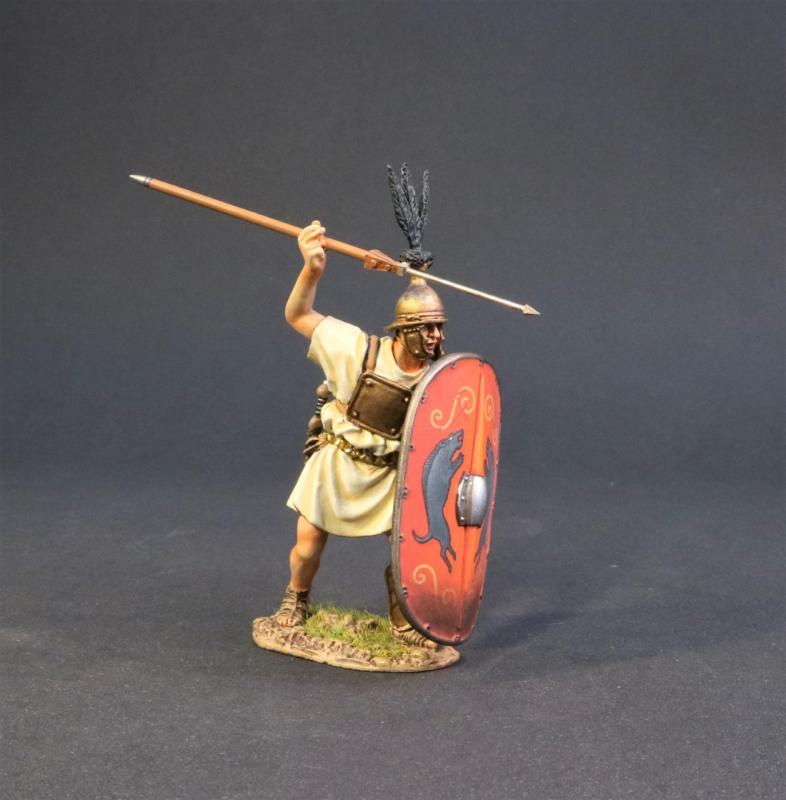 Hastatus (pilum in overhand position and red shield), The Roman Army of the Mid Republic, Armies and Enemies of Ancient Rome--single figure--RETIRED--LAST ONE!!
$45.00

Hastatus (pilum in overhand position and red shield), The Roman Army of the Mid Republic, Armies and Enemies of Ancient Rome

The Roman army of the mid-Republic (also known as the manipular Roman army or the "Polybian army"), refers to the armed forces deployed by the mid-Roman Republic, from the end of the Samnite Wars (290 BCE) to the end of the Social War (88 BC).  The first phase of this army, in its manipular structure (290–ca. 130 BCE), is described in detail in the Histories of the ancient Greek historian Polybius, writing before 146 BCE.

The central feature of the mid-Republican army was the manipular organisation of its battle-line. Instead of a single, large mass (the phalanx) as in the Greek and Early Roman army, the Romans now drew up in three lines (triplex acies) consisting of small units (maniples) of 120 men, arrayed in chessboard fashion, giving much greater tactical strength and flexibility.

The Republican army of this period, like its earlier forebear, did not maintain standing or professional military forces, but levied them, by compulsory conscription, as required for each campaigning season and disbanded thereafter (although formations could be kept in being over winter during major wars).  Service in the legions was limited to property-owning Roman citizens, normally those known as iuniores (age 16-46).

For the vast majority of the period of its existence, the Polybian levy was at war.  This led to great strains on Roman and Italian manpower, but forged a superb fighting machine.  During the Second Punic War, fully two-thirds of Roman iuniores were under arms continuously.  In the period after the defeat of Carthage in 201 BCE, the army was campaigning exclusively outside Italy, resulting in its men being away from their home plots of land for many years at a stretch.  They were assuaged by the large amounts of booty that they shared after victories in the rich eastern theatre.  But in Italy, the ever-increasing concentration of public lands in the hands of big landowners, and the consequent displacement of the soldiers' families, led to great unrest and demands for land redistribution.  This was successfully achieved, but resulted in the disaffection of Rome's Italian allies, who as non-citizens were excluded from the redistribution.  This led to the mass revolt of the socii and the Social War (91-88 BCE).  The result was the grant of Roman citizenship to all Italians and the end of the Polybian army's dual structure: the alae were abolished and the socii recruited into the legions.  The Roman army of the late Republic (88–30 BCE) resulted, a transitional phase to the Imperial Roman army (30 BCE – 284 CE).

Hastati (singular: Hastatus) were a class of infantry employed in the armies of the early and Mid Roman Republic.  They were originally some of the poorest men in the legion and could afford only modest equipment.  Later, the hastati contained the younger men rather than just the poorer, (though most men of their age were relatively poor).  Their usual position was the first battle line.