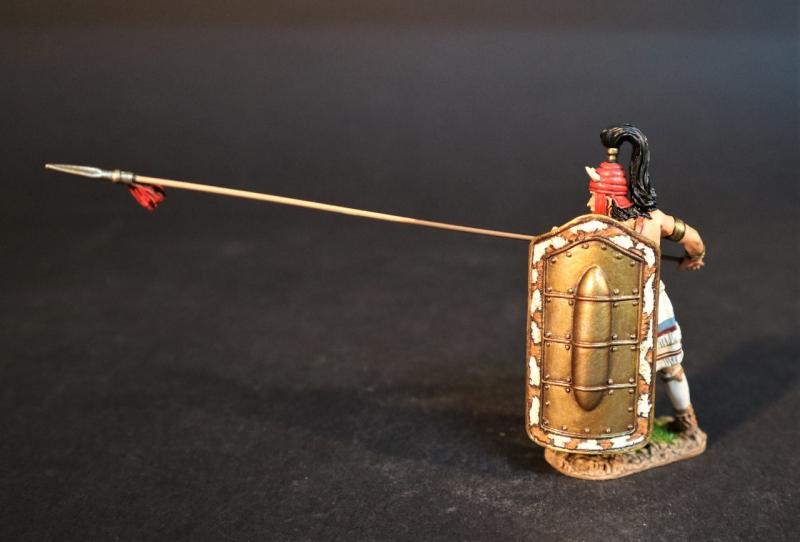 The Achean Greece, or Mycenean civilization was a major Bronze age power alongside Egypt, Assyria, Phoenicia, and the Hittites.  The rise of this militaristic society, and the development of Greek armour and weapons would eventually grant the Greeks immortality through the literary preservation of their great conflict of the Trojan War.

Normally swords are viewed as ubiquitous military armaments, but were not initially common during the early Bronze Age.  Large scale close quarter conflict rarely occurred, and ritualized duels involving armoured warriors may have formed the main part of dispute resolution.  Swords used large amounts of valuable bronze and were also useless for hunting due to a lack of reach.  The introduction of the sword as an object designed specifically for use against other humans marks the growth of conflict as a part of society.

Spears are perhaps the most common weapon type in human history and have been used in hunting since the palaeolithic era.  Boars were hunted for their tusks, used in helmets, and lions were hunted as a noble pursuit and to teach agility and discipline.  The famous “Lion Hunt Dagger” from a grave in Mycenae depicts such an event.  In hunting these dangerous animals, the spear was invaluable due to its flexibility and long reach. In Bronze Age warfare, the spear was important, as it used much less bronze than large bladed weapons such as swords and double edged axes.  This meant lower class citizens could be armed with a spear, which meant it was easier to equip large bodies of men in times of war.  Longer spears would be wielded two handed and used in a thrusting motion (visible in frescoes from Pylos).  The longer reach would have been invaluable if fighting against, or from the Bronze Age war chariots.  Shorter spears were used one handed with a shield and could also be thrown, not dissimular to the later Classical Greek phalanx.

The bow as a hunting weapon was well established, and arrows were effective in piercing bronze armour.  As illustrated on the “Lion Hunt Dagger” and other frescoes, it seems common for archers to be combined with tower shield spearmen as a strong defensive unit, especially to withstand early chariot warfare.  In such massed formations, the 12ft long spear would be far from impractible, and would have been a perfect weapon for levelling against an opposing line of infantry, or for defence against chariots.