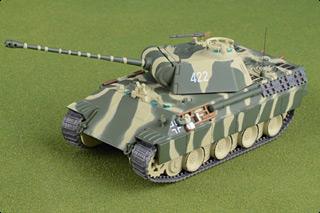 In many respects, the Panther tank was viewed as the finest armored fighting vehicle of the Second World War.  Based in large part upon the Soviet's highly successful T-34 medium tank, the PzKpfw V Ausfuhrung G was built by several manufacturers including MAN, Daimler-Benz, and MNH.  Mounting a fearsome 7.5cm KwK42 L/70 cannon and two 7.92mm MG34 machineguns, the Panther Ausf. G represented the third and certainly the most impressive installment in the Panther series.

Once the problems caused by the vulnerability of the engine and the transmission were solved, it proved to be a very effective fighting vehicle.  The crew was made up of five members: driver, radio operator (who also fired the bow machine gun), gunner, loader, and commander.

Pictured here is a 1:43 scale replica of a German Sd. Kfz. 171 Panther Ausf. A medium tank that was deployed to Poland during 1944.