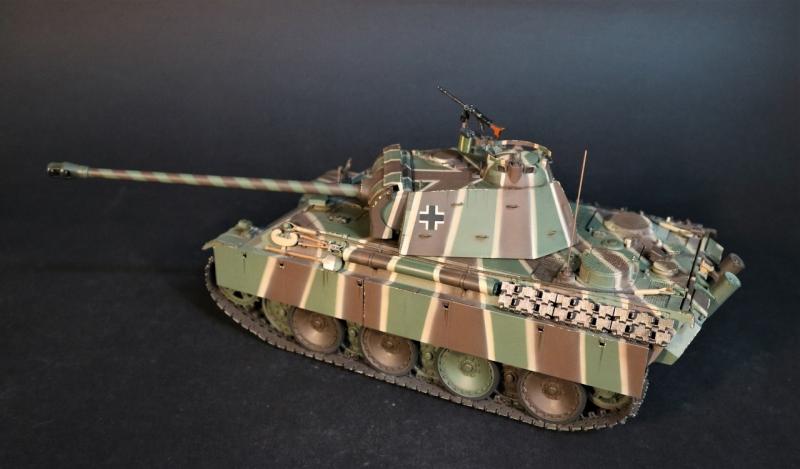 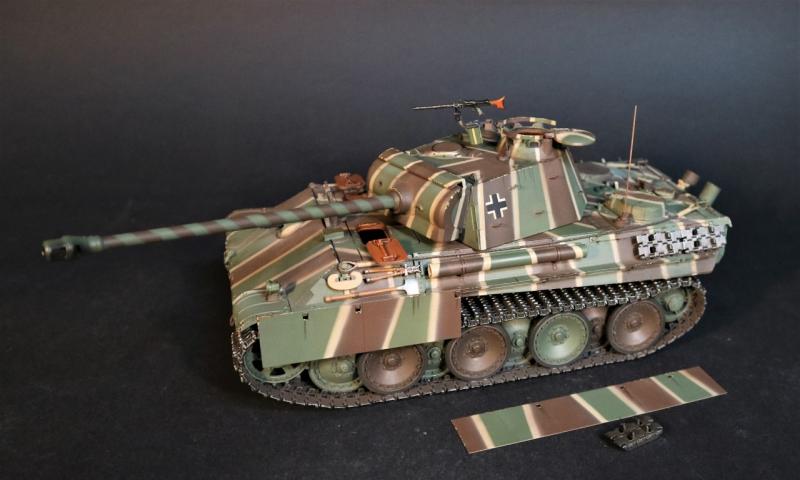 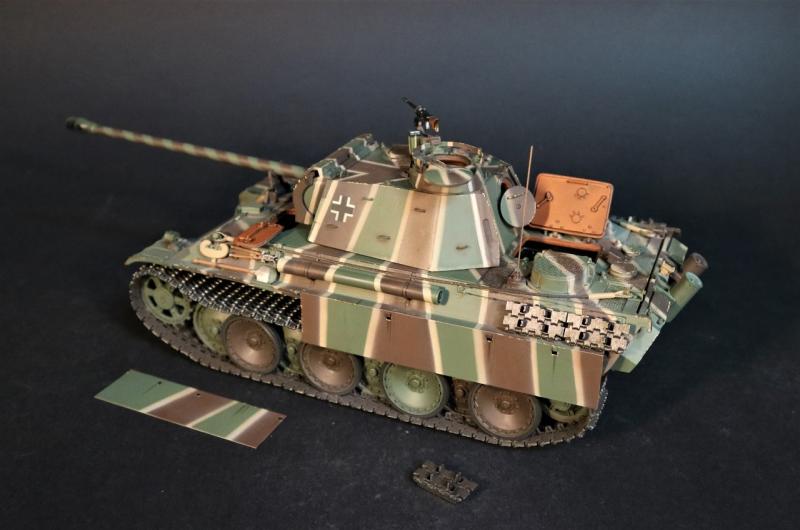 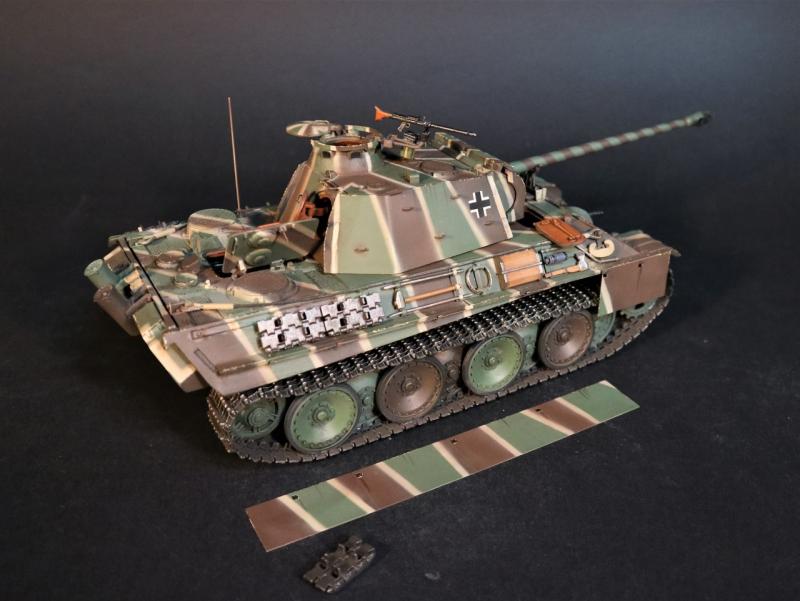 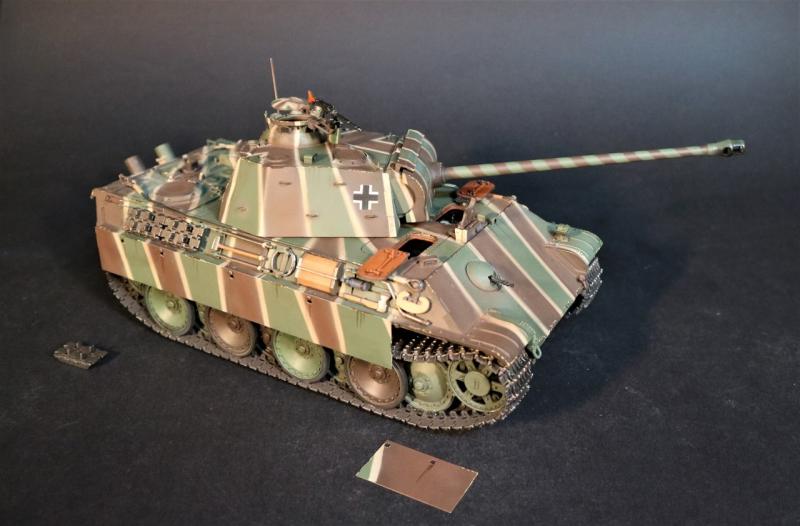 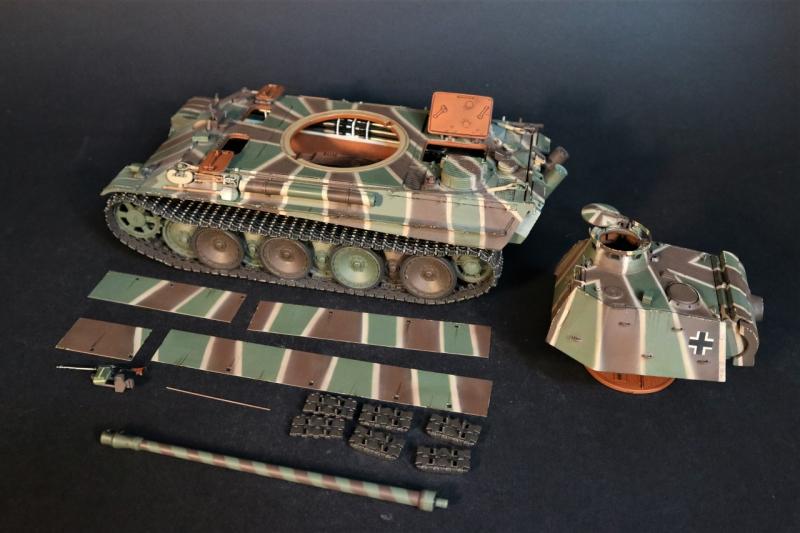 The Panzerkampfwagen "Panther" was arguably the finest tank design of World War Two.  Heavily influenced by combat experience against the Russian T-34 on the East Front, the Panther possessed an excellent balance of firepower, armor protection, and mobility.

The Panther's long barreled, high velocity 7.5 cm Kw.K. L/70 cannon possessed greater penetrating power than the 8.8 cm cannon on the Tiger I, and was capable of defeating any Allied tank.  In addition, the extremely flat shooting trajectory made first round hits at distances in excess of 1,000 meters probable.  This lethality was coupled with excellent armor protection, especially from the front, where the Panther's 80 mm front glacis plate sloped at 55 degrees provided more armor protection than the Tiger I.  Coupled with 100 mm turret and gun mantlet armor, the Panther's frontal armor was impervious to the low velocity 75 mm cannon found on the U.S. Sherman tank and British Cromwell's and Churchill's.

It was not uncommon for horrified Allied tankers to watch as multiple hits with armor piercing ammunition simply bounced off the Panther.  Even the upgunned Allied tanks like the 76mm Sherman, 17-Pounder British Firefly, and Russian T-34/85 could not penetrate the glacis plate of the Panther at normal combat ranges.  Therefore, Allied tankers usually maneuvered to get shots on the Panther's sides, where the weaker 45 mm turret sides and 40 mm hull sides could be penetrated at normal combat ranges.

Finally, the Panther rounded out its outstanding characteristics with excellent mobility. It was powered by the same Maybach engine as the Tiger I and King TIger, but because it was significantly lighter, the Panther possessed a much higher horsepower to weight ratio than the German heavy tanks.  This extra power, coupled with wide tracks that reduced the ground pressure to less than the Sherman tank, provided it with excellent cross country mobility.

When the assembly firms were directed to begin painting camouflage on Panthers prior to issuing them to the troops, the initial camouflage paint scheme used by M.N.H. was very similar to the patterns used by both M.A.N. and Daimler Benz.  However, at the end of October 1944, M.N.H. began to use their characteristic "striped" camo scheme.  This consisted of stripes or bands of color crossing the Panther diagonally from one side to the other including over the hull top and turret roof.  The pattern began with wide curvy bands, where the three camo colors would often overlap each other, but over time the bands started to straighten, tighten, and become distinctly sequential.  Additionally, the camo paint was sprayed onto the Panther extremely tightly, so that when viewed any farther than a meter or two away the paint scheme appeared to have a very hard, distinct edge as if it was applied over a mask or with a brush or roller. Another feature unique to M.N.H. was painting the German national insignia, the Balkenkreuz, on the sides of the turret (although many M.N.H. Panthers went into combat without any Balkenkreuz at all).  These features would remain the same for M.N.H. Panthers until the end of the war.

The JJD M.N.H. Panther also has the distinct features of a late war vehicle.  The strengthened "chin" gun mantlet was re-designed so the shape would prevent enemy shell impacts from being deflected downward and penetrating the Panther's thin hull roof armor, as often happened with the earlier curved gun mantlet.  Additionally, it has the flame suppressing exhausts (Flammenvernichter) designed to prevent the Panther's exhausts from being seen at night by enemy troops.  Lastly, the M.N.H. Panther has small rings welded to the sides and angled rear corners of the turret.  The purpose of these rings was to make it easier for tank crews to attach foliage to the tank, in order to disguise it from Allied air attacks.  This practice was crucial to survival late in the war when the Allies had complete air supremacy over the battlefield.
The John Jenkins Designs M.N.H. Panther was inspired by historic pics of Panthers and Panzergrenadiers from the Fallschirm-Panzer-Division 1 "Hermann Göring" fighting in East Prussia in 1945.  Although the elite Fallschirmjäger were the most famous ground combat units of the Luftwaffe, the Luftwaffe also fielded numerous regular infantry units (Luftwaffe-Feld-Divisionen) along with two armored units.  The first of these armored divisions was the Panzer-Division "Hermann Göring" which fought in the Mediterranean theatre against the Allies; first in Sicily and then later on the Italian mainland where it was involved in heavy combat attempting to destroy the Allied beachhead at Anzio.  Renamed the Fallschirm-Panzer-Division 1 "Hermann Göring" was combined with the Fallschirm-Panzergrenadier-Division 2 in February 1944 an continued to fight in Italy until July, when it was transferred to the Eastern Front.

Although the JJD M.N.H. Panther is meant to represent a tank from Fallschirm-Panzer-Division 1 "Hermann Göring", due to the late stage of the war when panzers often went into combat without unit markings, it will also work for numerous regular Heer and Waffen SS Panzer divisions.