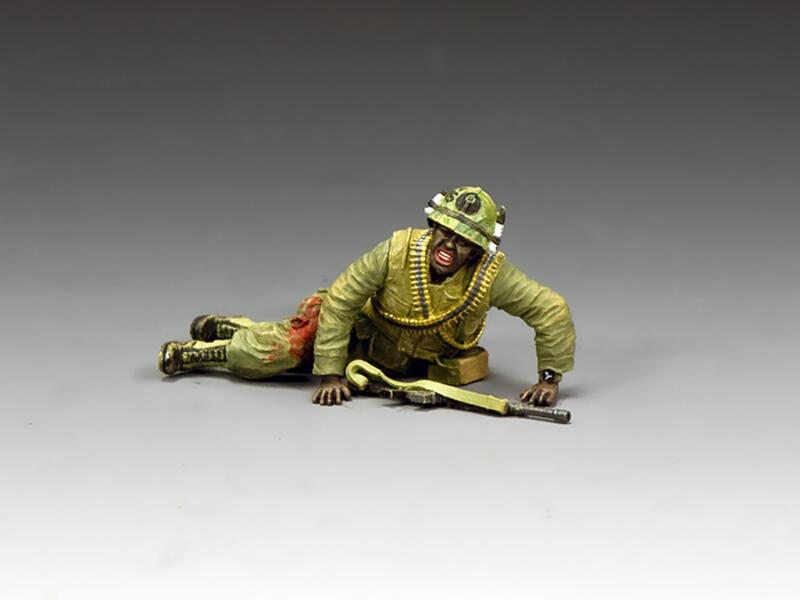 ‘Eightball’ is a black member of the ‘Lusthog Squad’ who combat correspondent ‘Joker’ joins to get a close up view of the fighting in Hue during the TET Offensive of 1968. As the squad moves into the city ‘Eightball’ is sent ahead to ‘scout-out’ an area and gets ambushed by a lone female Viet Cong sniper. The squad medic rushes forward to help the wounded ‘Eightball’ and is also shot by the sniper who puts a second bullet into the black Marine. At this point, the squad leader, ‘Cowboy’ hesitates to risk anymore casualties and wants to withdraw when ‘Animal Mother’ leaps to his feet and charges forward firing his M60 from the hip in a bid to rescue ‘Eightball’. The rest of the squad follow him. ‘Animal Mother’s’ brave, foolhardy assault on the enemy sniper allows the rest of the squad to advance to a better forward position. VN120 K&C’s ‘Eightball’ struggles to get off the ground after being shot by the V.C. sniper, his M16 in front of him.