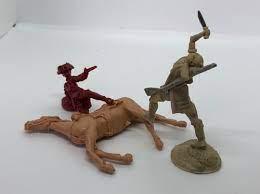 From the Vault Set 2--Braddock's Defeat

This vignette with three (3) poses has been released for collectors of early America.

Originally designed to be included with Barzso Playsets released in the late 90's, the wounded Native American sculpt was found in the Barzso Vault and released in the fall of 2020.  General Braddock and his fallen horse were included in the Braddock's Defeat Playset.

Back in stock, this figure set is a great addition to any French & Indian War diorama or battle scene.