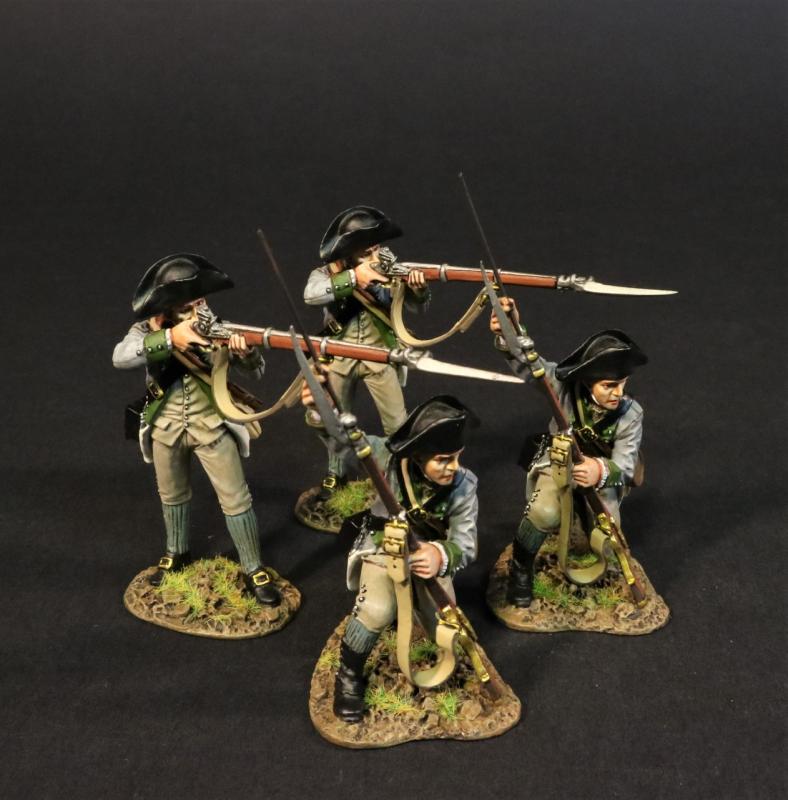 The 3rd New York Regiment was authorized on May 25th 1775 and organized from June 28th to August 4th from the counties of Ulster, Dutchess, Orange, and Suffolk under the command of Colonel James Clinton for 5 months service in Canada.  The enlistments of the first establishment ended on December 31st 1775.

At the Battle of Oriskany, the British loyalists under Major Stephen Watts, wearing their coats inside out tried to penetrate the American lines by pretending to be reinforcements from the 3rd New York Regiment at Fort Stanwix. They achieved this by reversing their coats, revealing their grey lining and green facings which were the same as the 3rd New York.

It was Captain Gardenier of Visscher’s Regiment at the American rear which spotted the ruse when one of his men went out to greet these “friends” and was promptly captured. Gardenier, armed only with a spontoon and sword, rushed forward and killed his man’s captor. Desperate hand to hand fighting followed between the loyalists and the American militia, as Gardenier shouted “they are not our men – they are the enemy! Fire away!”.

Both sides withdrew to recover, as three cannon shots were heard in the distance.  Herkimer and his men knew instantly what this meant, that the 3rd New York at fort Stanwix had raided and sacked the loyalist camp.  Already demoralized by heavy losses, the threat to their possessions persuaded the remaining warriors to leave, and with insufficient numbers to fight on, Johnson also decided to withdraw.

The 3rd New York Regiment that defended Fort Schuyler (Stanwix) against the British in 1777 had been reorganized and established from other New York Regiments on January 26, 1777.  The regiment was commanded by Col. Peter Gansevoort, with Lt.Col. Marinus Willett as second in command.  The regiment initially consisted of eight companies, with the men primarily drawn from Duchess and Ulster Counties and the New York City area.  The Regiment was mustered at Fishkill and first posted on Constitution Island, opposite West Point.
The 3rd NY had its first taste of battle on March 22, 1777 when it helped drive off a raiding party of 600 British troops at Peekskill.  This skirmish also gave the regiment its first battle casualties, with two killed and four or five wounded.  The first detachment of the 3rd NY, under Major Robert Cochran, reached Ft. Schyuler on April 12, 1777.  Col. Gansevoort took command of the fort on May 3, and the remainder of the regiment (200 men) under Lt.Col. Willett, departed Constitution Island for Ft. Schuyler on May 12.  Willett's detachment traveled up to Albany on three sloops, then marched from Schenectady to Ft. Schuyler, escorting the regiment's baggage train of seven wagons up to the post.  Willett's detachment reached the fort on May 26, after having Capt. Dewitt's Company posted to Fort Dayton at German Flatts (this company remained at Ft. Dayton until July).  The regiment was engaged in the constant work of repairing and rebuilding the fort from May through August.
In August of 1777, the 3rd NY helped to successfully defend the fort in a 21 day siege by a British force of 2,000 regulars, Germans, loyalists, and allied Indians.  During this time, a detachment of the regiment under Lt.Col. Willett took part in a raid on the main loyalist and Indian camps to the south and east of the fort. On the detachment's return to the fort, they skirmished with British troops attempting to cut off their retreat.  Cannon fire from the fort, combined with the detachment's own 3-pound gun, finally drove the British off.  This raid that destroyed the main loyalist and Indian camps, resulted in the further capture of a great deal of equipment and severely cooled the Indian's desire for further fighting. During this raid, the regiment did not lose a single man.
After the siege, the regiment continued to garrison the fort through December of 1778, when it was relieved by the 1st NY Regiment, and was sent down into the lower Mohawk-upper Hudson Valley area.  In 1779, the 3rd NY Regiment received a gift from Col. Gansevoort in the form of a regimental flag.  This flag, which was carried for the remainder of the war, later served as the basis for the present day New York State flag.  On campaign, the regiment made up part of the troops committed to the various expeditions against British allied Six Nations settlements.
In April 1779, the light infantry company returned to the Mohawk Valley as part of a detachment sent from Ft. Schuyler to destroy the principle Onondaga Indian villages.  From August through September, the entire regiment was part of the Clinton-Sullivan expedition that destroyed the principle Cayuga and Seneca Indian villages in western New York.  The regiment also participated in one major battle of the expedition at Newtown, which resulted in a major defeat for the Indians and the loyalist troops supporting them.
In September, the 3rd NY once again returned to the Mohawk Valley, having been given the task of destroying the Mohawk village near Fort Hunter and retrieving the expedition's baggage.  With the approach of winter, the regiment rejoined the main army under General Washington for the hard winter encampment of 1779-80 at Morristown, New Jersey.
Throughout 1780, the 3rd NY was engaged in garrison duties.  Various detachments of the regiment were posted to the Mohawk Valley, the upper and lower Hudson Valley, and West Point.  In December of 1780, the 3rd NY became part of the 1st NY Regiment, as the five New York regiments were consolidated into two for the remainder of the war.  As part of the 1st NY, the men of the 3rd NY Regiment took part in the siege of Yorktown in October of 1781.  The New York Light Infantry companies made up part of the force that successfully attacked Redoubt Number 10, which helped bring about the British surrender.  After Yorktown, the New York troops went into winter quarters at Pomona, New Jersey.  In the spring of 1782, the two New York regiments went into final quarters at New Windsor, New York, as the war wound down.  In June, many of the men were furloughed home; and in November 1783, with the coming of peace, the men of the old 3rd NY Regiment were honorably discharged and became citizens of the new United States of America.