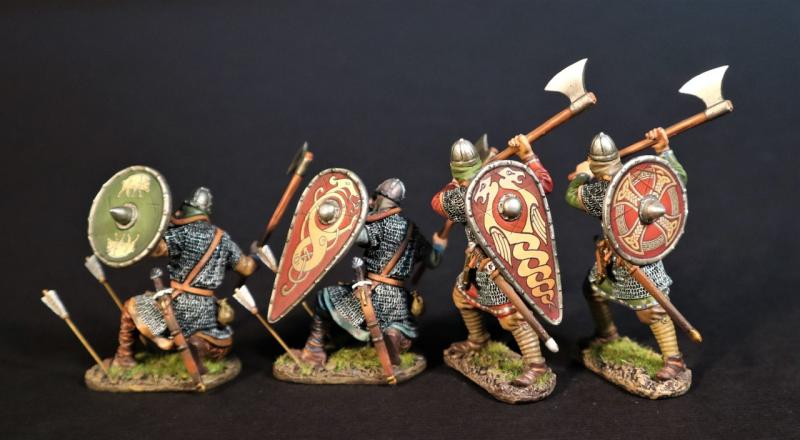 THE AGE OF ARTHUR

A Housecarl was a non-servile manservant or household bodyguard in medieval Northern Europe.

The institution originated amongst the Norsemen of Scandinavia, and was brought to Anglo Saxon England by the Danish conquest in the 11th Century.  They were well-trained, and paid as full time soldiers.  In England, the royal housecarls had a number of roles, both military and administrative.

According to 12th Century Danish historian, Svend Aggeses, Cnut’s housecarls were governed by a specific law, the “Witherlogh” or “Lex Castrensis”.  Their organization in a band or guild was Scandinavian in character, but the legal process the “Witherlogh” defines is mainly derived from canon law, directly or through Anglo Saxon laws.  The “Witherlogh” defined an etiquette, such as Housecarls were to be seated at the kings’ tables according to a number of factors, among which skill in war and nobility.  They could be disgraced by being moved to a lower place at the tables.  This was mainly punishment for minor offences, such as not giving proper care to the horse of a fellow housecarl.  After three such offences, the offender could be seated at the lowest place, where no-one was to talk to him, but everyone could throw bones at him at will.

Quarrels between housecarls were decided by a specific tribunal, in the presence of the king.

A special tax was levied to provide pay in coin to the royal housecarls.  According to historical references, this pay was monthly.  Therefore, due to these wages, the housecarls can be seen as a type of mercenary.

They were not bound to indefinite service, and there was only one day in the year during which they could leave the king’s service.  That was New Year’s Eve, a day on which it was customary for Scandinavian kings to reward their retainers with gifts!.

The number of housecarls receiving land grants and estates from the king, seems to be limited.  The “Domesday Book” records only thirty three landholding housecarls in the kingdom, and these estates were also small.  Thus it does not seem that the English landholders were deprived of their properties to provide for land grants to the king’s housecarls.

The royal housecarls had some administrative duties in peacetime as the king’s representatives.  In 1041, there was a revolt against a very heavy levy in Worcester, and two of the king’s housecarls, who were acting as tax collectors, were killed.

By the end of the 11th Century in England, there may have been as many as 3,000 royal housecarls.

The housecarls of Harold Godwinson’s army had a crucial role as the backbone of Harold’s army at Hastings.  Although numerically they were the smaller part of Harold’s army, their superior equipment and training meant they could have been used to strengthen the militia, or “Fyrd”, which made up most of the Anglo Saxon army.  The housecarls were positioned in the centre around the leader’s standard, but also probably in the first ranks of both flanks, with the fyrdmen behind them.

At the Battle of Hastings, these housecarls fought after Harold’s death, holding their oath to him until the last man was killed.