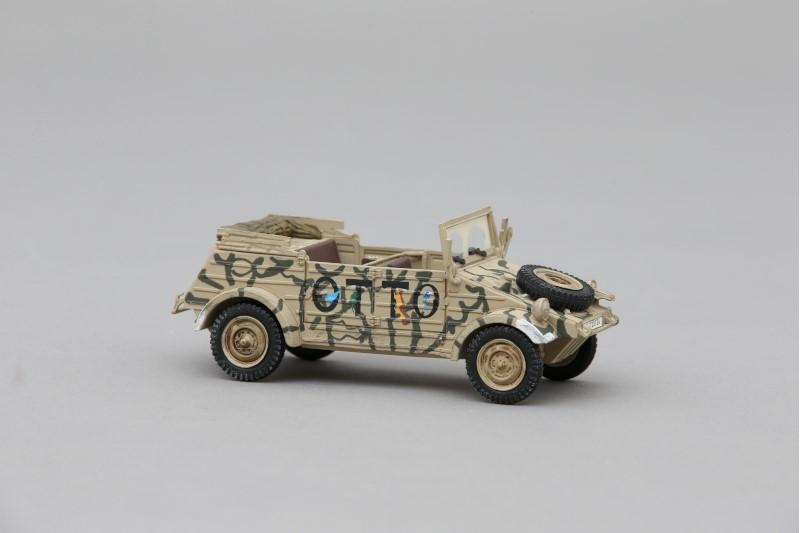 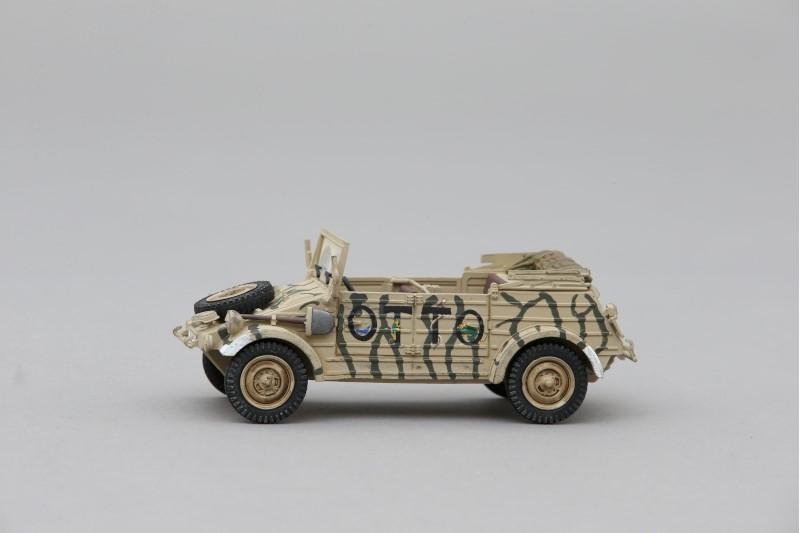 The Volkswagen Kübelwagen was a light military vehicle designed by Ferdinand Porsche and built by Volkswagen during World War II for use by the German military (both Wehrmacht and Waffen-SS).  Based heavily on the Volkswagen Beetle, it was prototyped as the Type 62, but eventually became known internally as the Type 82.  Full-scale production of the Type 82 Kübelwagen started in February 1940, as soon as the VW factories had become operational.  No major changes took place before production ended in 1945, only small modifications were implemented, mostly eliminating unnecessary parts and reinforcing some, which had proved unequal to the task.  Prototype versions were assembled with four-wheel-drive (Type 86) and different engines, but none offered a significant increase in performance or capability over the existing Type 82 and the designs were never implemented.  As of March 1943, the Kubelwagen received a revised dashboard and the bigger 1,131 cc engine, developed for the Schwimmwagen, this produced more torque and power than the original 985 cc unit.  When production ceased at the end of the war, 50,435 Kübelwagen vehicles had been produced, the vehicle had proven itself to be surprisingly useful, reliable, and durable.  It was to the Germans what the Willy's Jeep was to the Allies.

Desert Kubelwagen in the personal colour scheme of 158 aerial kills, fighter Ace Hans-Joachim Marseille.  This car was painted by Italian ground crew for Marseille and is adorned with some beautiful looking animals adorning the words 'Otto', which were also hand painted onto the side of the car.  Otto is the Italian word for the number 8 and commemorates Marseille shooting down 8 Allied aircraft in one day, a record for the Desert theatre.

As you can see, the Kubelwagen looks great with a couple of your favourite figures stood next to it or on its own say, in an airfield diorama or outside a Head-Quarters.  Another possibility is to portray it with Allied soldiers and some German prisoners, or even dead and wounded Germans surprised in an ambush!