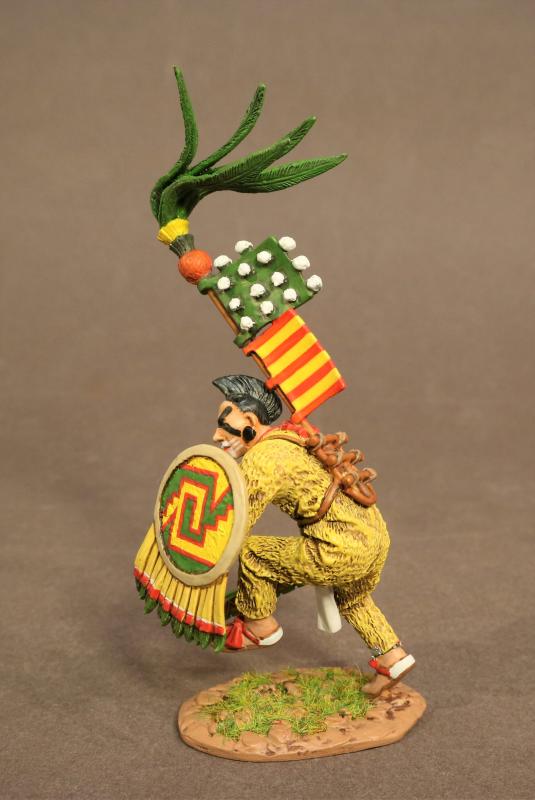 Cuachicqueh Captain, The Aztec Empire, The Conquest of America--single figure
$56.00

Cuachicqueh Captain, The Aztec Empire, The Conquest of America

The Cuachicqueh was the most prestigious warrior society and the tlacateccatl, a very high ranking general, was always a member.  Not much is known about this unique band of Aztec fighters, some sources mention them as being akin to the ‘berserkers’—and thus their ranks only included esteemed warriors who had dedicated their lives to the pursuit of warfare, instead of titles and land grants.  The cuachicqueh possibly comprised full-time soldiers who had proved their flair in battles with courage, ferocity, and downright fanaticism.  They were usually excluded from holding office because of their wild nature.  They were usually recognizable by their shaven heads, which left a crest of hair that is described in text sources as on the left side of the head, but usually depicted in pictorial sources in the middle.

The Cuachicqueh took an oath not to take a step backwards during a battle on pain of death at the hands of their fellow warriors.  The officers were recognizable in the battle by their wood poles (Pamitl) with the feathers and banners flying from them.  They fastened this banner to their back, so that they did not become hindered in battle.

They often would be at the front of the Aztec army shouting insults and mocking the enemy, in an effort to provoke the enemy foolhardy to break ranks and attack.