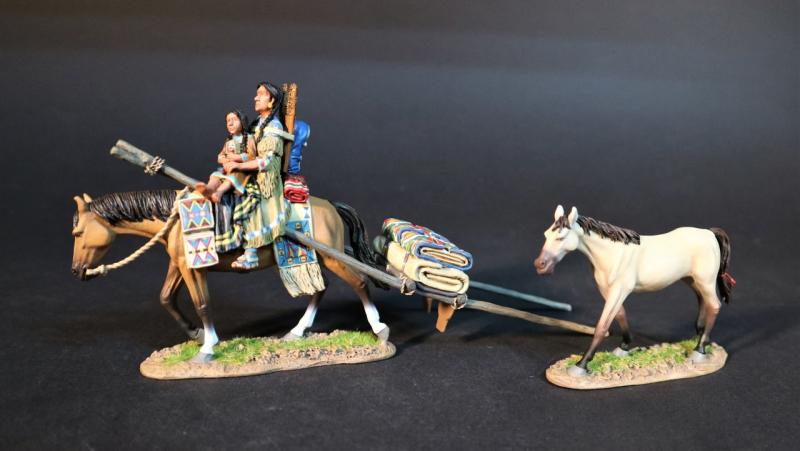 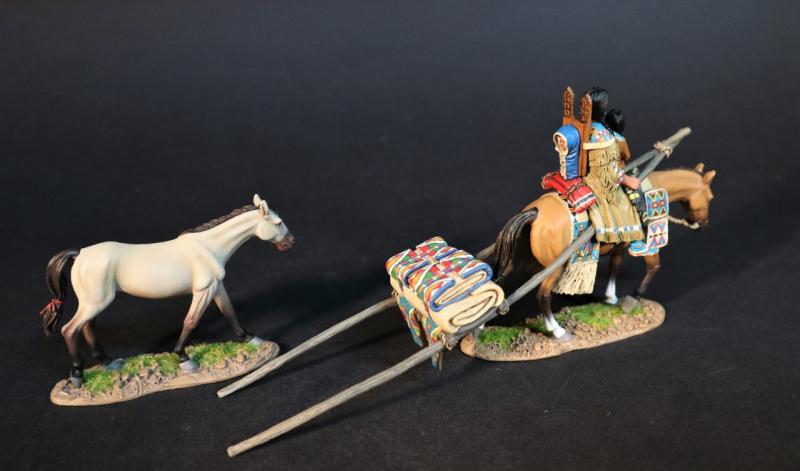 A Travois is a frame structure that was used by the plains Indians of North America to drag loads over land.  There is evidence to support that travois were used in other parts of the world before the invention of the wheel.  Initially, the travois was pulled by dogs.  The basic dog travois consisted of two aspen or cottonwood poles notched and lashed together at one end with buffalo sinew with the other ends splayed apart.  Cross bars are lashed between the poles near the splayed ends, and the finished frame looks like a large letter A with extra cross bars.  The apex of the A, wrapped in buffalo skin to prevent friction burns, rests on the dog’s shoulders, whilst the splayed ends drag over the ground.  Women both built the travois and managed the dogs.  Buffalo meat and firewood were typical travois loads.

Although the dog travois were small, they were capable of pulling up to 20-30kg.  In hot weather, travel was slower as it was more tiring for the dogs.  Dog travois can be seen in the paintings of Karl Bodmer.

By the mid 18th Century, the dog travois had given way to the horse travois.  When dogs were replaced by horses, the greater pulling power allowed trips to increase in size and household goods to multiply.  Instead of specially constructed sleds, the plains Indian tribes would simply cross a pair of tepee poles across the back of the horse, and attach a burden platform between the poles behind the horse.  This served two purposes at once, as the horses could then simultaneously carry the tepee poles and some additional baggage.  Children often were able to ride in the back of the horse travois.

In some tribes, it was also traditional to leave the tepee poles behind at the old camp, for use by the next tribe or family to camp there.

More to come at the end of the year.