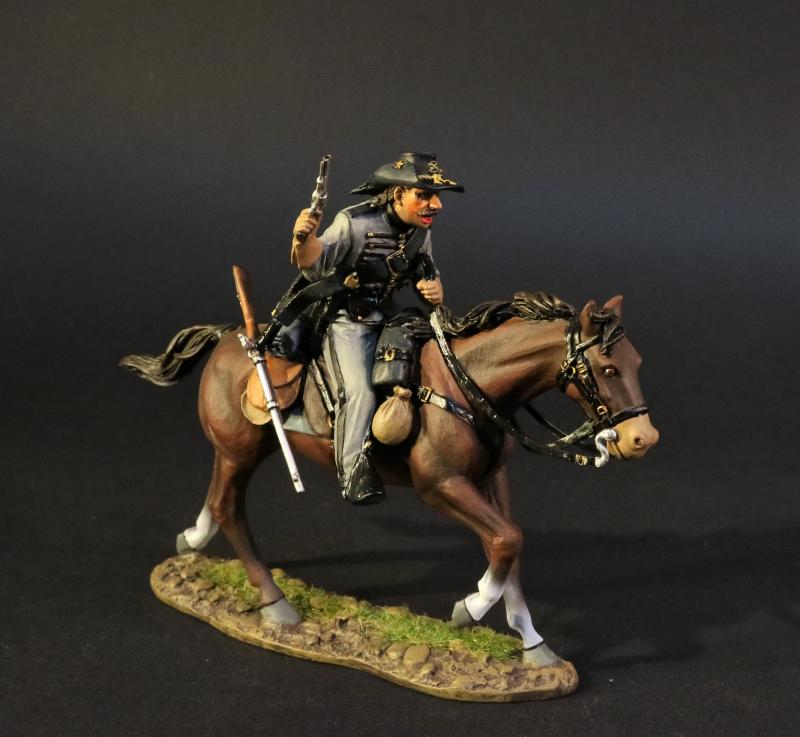 The 1st Virginia Cavalry Regiment was formed in the spring of 1861 around the nucleus of several cavalry companies from the valley of Virginia which had been placed under the command of J.E.B. Stuart.

Regimental organization was completed by the appointment of Stuart as Colonel on 16th July 1861.

The unit then comprised ten companies, lettered A-M, of men enlisted for Confederate States service for one year.

The regiment was reorganized 22nd April 1862, and served thereafter through most of the civil war.

J.E.B. Stuart was appointed Lieutenant Colonel, infantry, Provisional Army of Virginia, at Harpers Ferry, Jefferson County, Virginia on 8th May 1861. He was appointed Colonel of 1st Virginia Cavalry on 16th July 1861. He was assigned to command the cavalry of the Army of the Shenandoah during the first battle of Manassas on July 21st 1861, and was appointed Brigadier General, Confederate States Army on 24th September 1861.

The 1st Virginia Cavalry Regiment was often illustrated in the newspapers during the early days of the war. Especially during the First Manassas when Stuart, with companies H and B under R. Welby Carter and John Blair Hoge, made a dashing charge upon the 11th New York Zouaves. Artists on both sides were inspired by the episode, and reporters dubbed the companies the “Black Horse Cavalry”.

The troopers performed well during this engagement, and it was in no time, especially under the inspiring leadership of Stuart and Fitzhugh Lee, that they grew into one of the crack mounted outfits of the Confederate service.