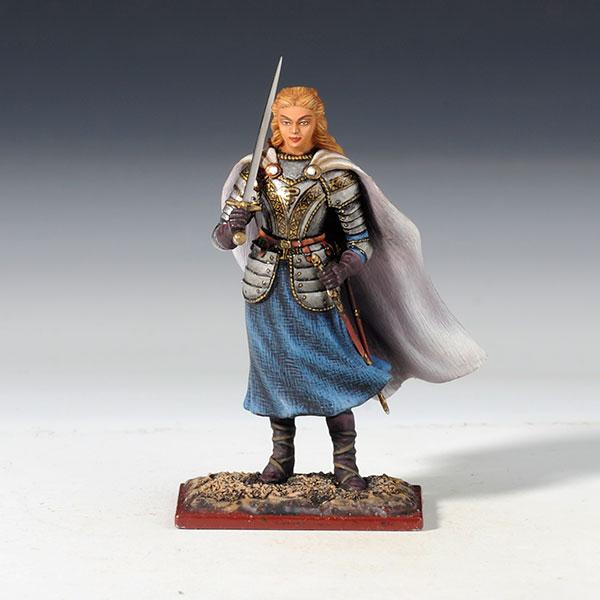 Catarina Sforza in Armor with Sword

Caterina was born the illegitimate daughter of the Duke of Milan.  Raised in the Milan court, she was well educated, athletic, and beautiful.  Throughout her career, she maintained her beauty regimen, ensuring her impact on society.  She was married in 1477 to the ‘nephew’ of Pope Sixtus IV.  (It was rumored that he was the Pope’s son.)
In 1484 upon death of the Pope, Caterina was charged with occupying and protecting Castle Sant’Angelo in Rome, holding it ‘til a new Pope could be named.  Caterina was a strict and formidable commander of her Castle Sant’Angelo army.  It was said that she cut a striking figure in her gold satin gown, plumed hat, and waving a curved sword.
In 1488, her husband, Riario, was murdered by rival members of the Orsi family.  The Orsis went on to sack her palace in Forli and held her children hostage.  With military help from Ludovico Moro, Duke of Milan, Caterina was able to defeat her enemy and recover her domain.
Her revenge on the Orsi included executions, secret strangulations, and, for the family patriarch, disembowelment and dismemberment.  Caterina was not a woman to cross.
Caterina would go on to fight against Cesare Borgia.  Borgia defeated Caterina and her forces and imprisoned her.  Subsequent a year’s imprisonment, she escaped to Florence.  Upon the death of Pope Alexander VI, she attempted to regain control of her former territories.  Her petition to Pope Julius II to regain her realm was denied, because the people did not want her back.  Caterina found refuge in a convent where she died of influenza in 1509.