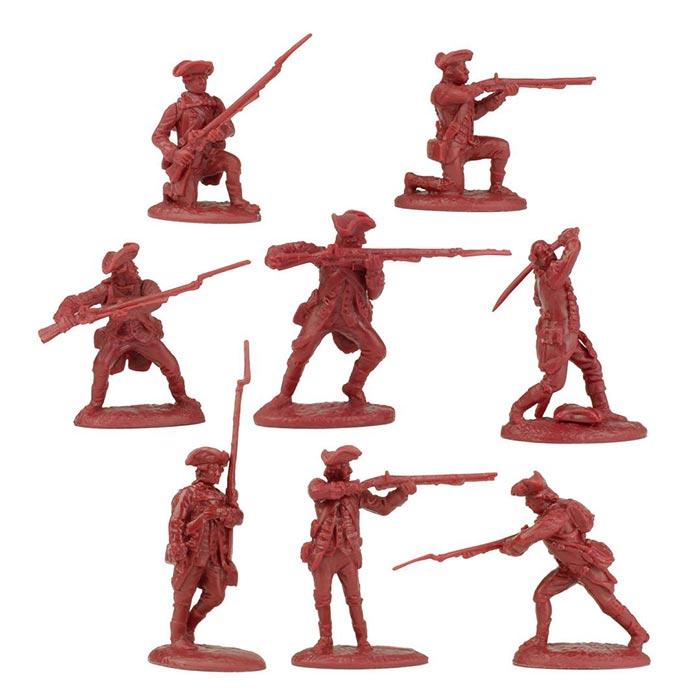 At the outset of the American War of Independence, the British Army’s largest combat arm-–the infantry-–numbered seventy regiments of foot.  With one exception, these regiments were single-battalion organizations.  Each battalion had ten companies and an authorized peacetime strength of 477 officers and men.  A regiment’s tallest and strongest men belonged to the grenadier company, which specialized in spearheading assaults.  Smaller and especially agile fellows composed the light infantry company, which would screen a regiment’s front, guard its flanks, and engage in open-order skirmishing.  The rest of the regiment’s personnel went into its eight battalion companies.  These soldiers were also known as “hatmen” because they wore cocked hats instead of the grenadier’s tall bearskin or the light infantryman’s leather cap.  Throughout the Revolutionary War, British commanders invariably detached grenadier and light infantry companies from their parent regiments and brigaded them with troops of their own kind in elite battalions that undertook the most daring and dangerous missions in any campaign.  ​

Though deprived of arguably their best troops, British foot regiments gave a good account of themselves from 1775 to 1781.  Contrary to myth, the Redcoats quickly dispensed with the dense, three-rank formations of the European battlefield.  Starting with General William Howe’s New York Campaign in mid-1776, British infantry deployed in two ranks, which gave each regiment a wider front, and in open order with eighteen inches between files, which made it easier to move through rough and wooded country.  European enemies feared the British soldier for his devastating musketry, but on American battlefields he placed his primary reliance on the bayonet.  The Redcoats would advance quickly toward an opposing battle line, halt fifty to seventy-five yards away to fire a volley, and then sweep forward to rout their foes with cold steel.  Such tactics required troops possessing discipline, courage, and the ability to both heed orders and think for themselves, qualities that the British soldier displayed repeatedly before his country wearied of the cost of trying to smother American independence.