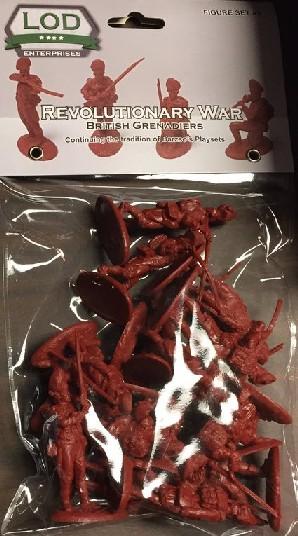 Grenadiers comprised only 10 percent of the red-coated infantry that King George III sent to crush American independence, but they made an indelible impression on their opponents.  Drawn from the tallest and strongest men in each regiment, the grenadier company stood out from the rest.  The miter-shaped bearskin cap issued to each grenadier added an additional twelve inches to his height and enhanced his fearsome appearance.  Grenadiers represented the British Army’s bravest of the brave, and they rarely failed to meet that high standard of battlefield courage.  ​

The grenadiers’ marching song became the trademark tune of the entire British Army, and it continues to stir the hearts of Queen Elizabeth II’s soldiers:

​The British Army first introduced grenadier companies to its infantry regiments in 1678, intending such troops to throw small fused bombs called grenadoes or grenades into the enemy’s ranks, particularly during sieges.  That role required a strong arm as well as the nerve to confront an opponent’s fire at close range.  Grenadiers ceased using grenades long before the American Revolution, but they found plenty of other opportunities to demonstrate their valor.  ​

When a British regiment of foot formed in line of battle, the grenadier company habitually took its place on the right flank, the traditional post of honor.  During the Revolutionary War, however, grenadiers were detached from their parent regiments and brigaded together in elite battalions with companies of their own type.  Grenadiers spearheaded British attacks on tough Patriot positions, relying on their zeal, strength, and bayonets to carry the day.  Even more frequently, they operated in tandem with light infantry battalions to execute the demoralizing flanking movements that often caused their opponents to break and run.