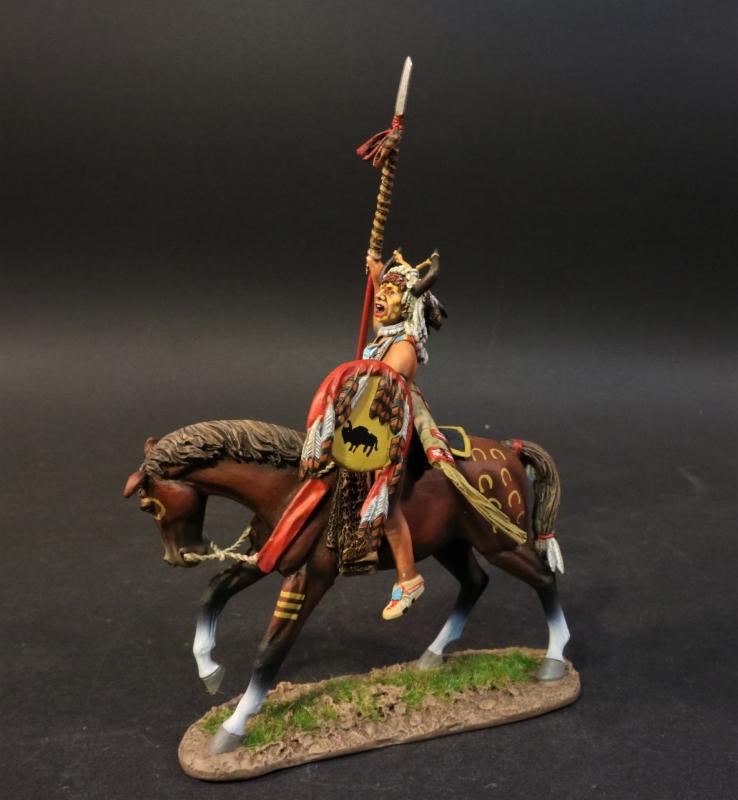 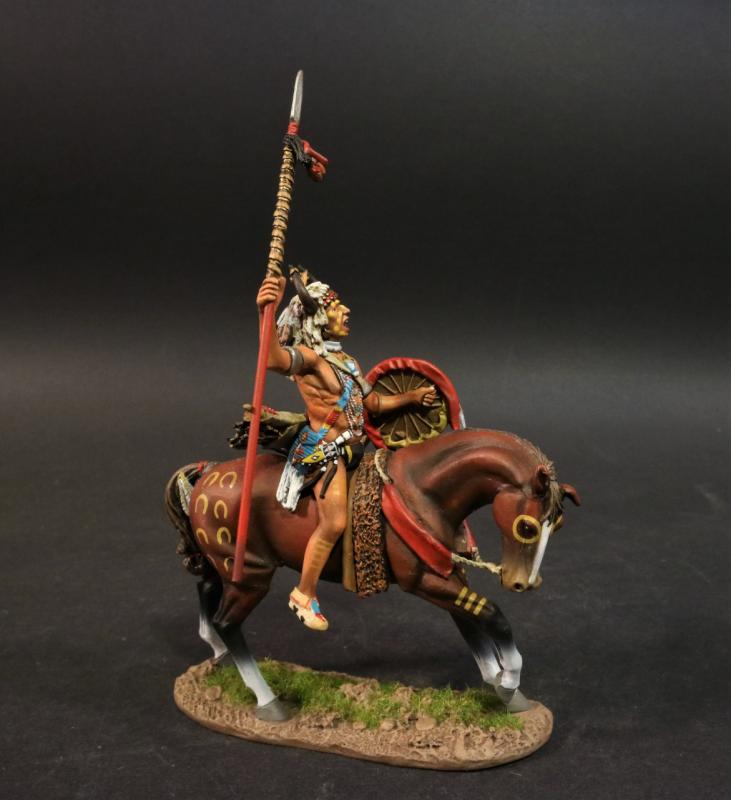 Blackfoot Warrior with Shield and Raised Spear, The Blackfoot, The Fur Trade

The Niitsiapi, also known as the Blackfoot or Blackfeet Indians, were found in the Great Plains of Montana and the Canadian provinces of Alberta and Saskatchewan.  Only one of the Niitsitapi tribes were called Blackfoot, or Siksika.  The name is said to have come from the colour of the peoples’ moccasins.  It is believed that the leather used to make the moccasins came from the soot-stained leather at the top of the wigwam.  Others believe they had dyed or painted the soles of their moccasins black.  One legendary story claimed that the Siksika walked through ashes of prairie fires, which in turn colored the bottoms of their moccasins black.

Historically, the member peoples of the Blackfoot Confederacy were nomadic bison hunters and trout fishermen, who ranged across large areas of the northern Great Plains of western north America.  They followed the bison herds as they migrated between what are now the United States and Canada, as far north as the Bow River.  In the first half of the eighteenth century, they acquired horses and firearms from white traders and their Cree and Assiniboine go-betweens.  The Blackfoot used these to expand their territory at the expense of neighbouring tribes.  They eventually became a formidable example of the classic Plains Indian culture.  They were a powerful force, controlling an area that extended from current day Edmonton, Alberta Province, nearly to Yellowstone Park, and from Glacier Park to the Black Hills of South Dakota.

The Badger-Two Medicine Area is a significant sacred site for the tribe.

Up until around 1730, the Blackfoot traveled by foot and used dogs to carry and pull goods.  They had not seen horses, but were introduced to them on the Plains as other tribes, such as the Shoshone, had already adopted their use.  The Blackfoot called the horses Ponokamita (elk dogs).  The horses could carry much more weight than dogs and moved at greater speed, and they could be ridden for hunting and travel.  Horses revolutionized life on the Great Plains and soon became to be regarded as a measure of wealth.  Warriors regularly raided other tribes for their best horses, and were generally used as universal standards of barter.  Medicine men were paid for cures and healing with horses, and those who designed shields and war bonnets were also paid in horses.  The individual’s prestige and status was judged by the number of horses that he could give away.

Blackfoot war parties would ride hundreds of miles on raids.  A boy on his first war party was given a derogatory name, but after he had stolen his first horse or killed an enemy, he was given a name to honour him.  Warriors would strive to perform various acts of bravery called “counting coup”, in order to move up in social rank.

The coups in order of importance were:  taking a gun from a living enemy, and or touching him directly, capturing lances, and bows, scalping an enemy, killing an enemy, freeing a tied horse from in front of an enemy lodge, leading a war party, scouting for a war party, stealing headdresses, shields, pipes (sacred ceremonial pipes) and driving a herd of stolen horses back to camp.

In subsequent years, mountain men trapping in Blackfoot country generally encountered hostility.  When John Colter, a member of the Lewis and Clarke expedition, returned to Blackfoot country, he barely escaped with his life!  In 1809, Colter and his companion were trapping on the Jefferson River, by canoe when they were surrounded by Blackfoot warriors.  Colter’s companion John Potts, did not surrender and was killed.  Colter was stripped of his clothes and forced to run for his life, after being given a head start (which famously became known in the annals of the West as Colter’s Run).  He eventually escaped by reaching a river five miles away and diving under either an island of driftwood or a beaver dam, where he remained concealed until nightfall.  He then trekked another 300 miles to a fort.

Like many other Great Plains Indian nation, the Niitsitapi often had hostile relationships with white settlers.b Despite the hostilities, the Blackfoot stayed largely out of the Great Plains Indian Wars, neither fighting against nor scouting for the United States army.  When the Lakota, Cheyenne and Arapaho were fighting the United States army, they sent runners into Blackfoot territory, urging them to join the fight.  Crowfoot, one of the most influential Blackfoot chiefs, dismissed the messengers and threatened to ally with the NWMP to fight them if they came north into Blackfoot country.  News of Crowfoot’s loyalty reached Ottawa and from there to London.  Queen Victoria praised Crowfoot and the Blackfoot for their loyalty.

The Blackfoot also chose to stay out of the Northwest Rebellion.  News of the continued neutrality reached Ottawa, where Lord Lansdowne, the governor general, expressed his thanks to Crowfoot again on behalf of the Queen back in London.