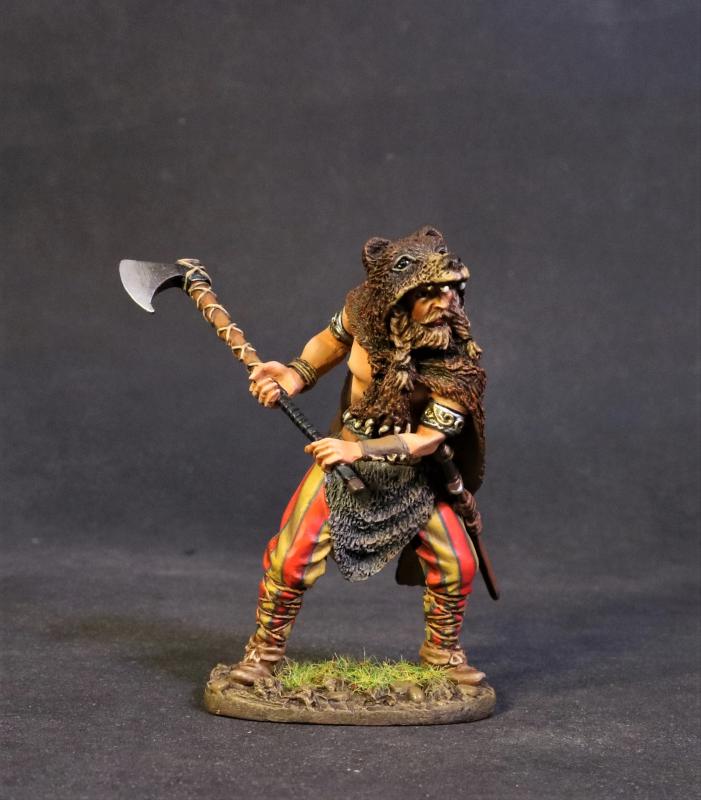 Bear Warrior Berserker, The Vikings, The Age of Arthur--single figure--RETIRED--LAST ONE!!
$54.00

Bear Warrior Berserker, The Vikings, The Age of Arthur

In the Viking world, berserkers were those who were said to have fought in a trance like fury, a characteristic which later gave rise to the modern English word “berserk”, meaning “furiously violent or out of control”.

In battle, the berserkers were subject to fits of frenzy. They would howl like wild beasts, foamed at the mouth, and gnawed the iron rim of their shields. According to belief, during these fits they were immune to steel and fire, and made great havoc in the ranks of the enemy. When the fever abated they were weak and tame. Accounts can be found in the sagas.

When Viking villages went to war in unison, the berserkers often wore special clothing, for instance furs of a wolf or bear, to indicate that this person was a berserker, and would not be able to tell friend from foe when in "bersærkergang". In this way, other allies would know to keep their distance.

Other historians reinforce their theory of the “bear shirt” by the fact that it is believed berserkers drew their power from the bear and were devoted to a bear cult, which was once widespread across the northern hemisphere.

The bear-warrior symbolism survives to this day in the form of the bearskin caps worn by the guards of the Danish monarchs.