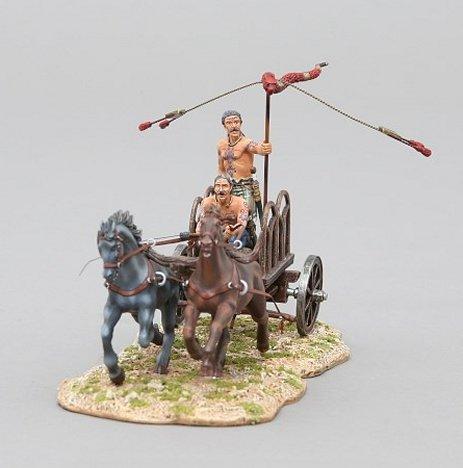 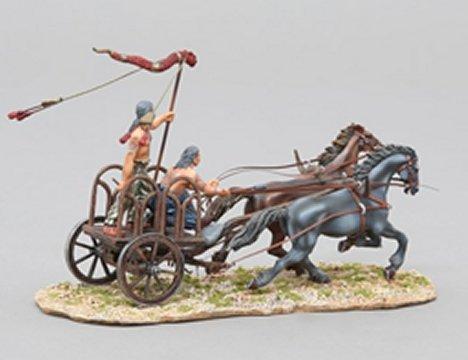 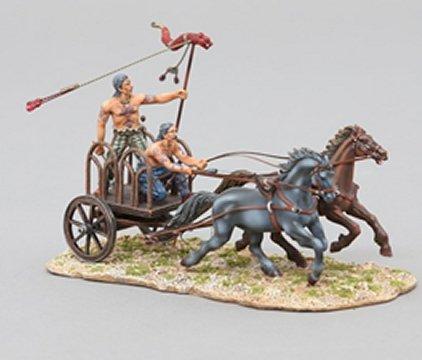 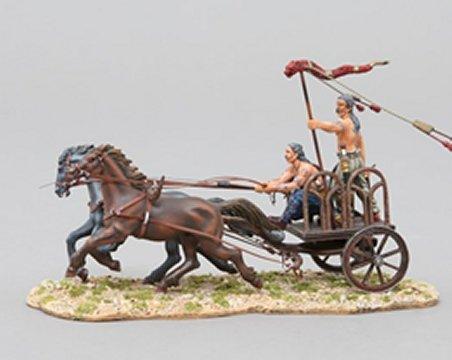 Featuring a British chariot with two crew in a somewhat terrifying combination--if you were a Roman legionnaire facing them!

Julius Caesar made two expeditions to England, but did not stay long enough to establish a colony or long term settlement.  The main invasion of Britain was carried out some 90 years later in 43 AD.  The Romans were unfamiliar with chariots employed as a fighting tool, which must mean they had died out within other parts of the Roman empire as a fighting platform by then?  However, the Britons in their chariots certainly had an impact on Caesar who wrote the following:  "Their mode of fighting with their chariots is this:  firstly they drive about in all directions and throw their weapons and generally break the ranks of the enemy with the very dread of their horses and the noise of their wheels; and when they have worked themselves in between, the troops of horse leap from their chariots and engage on foot.  The charioteers in the mean time withdraw some little distance from the battle, and so place themselves with the chariots that, if their masters are overpowered by the number of the enemy, they may have a ready retreat to their own troops.  Thus they display in battle the speed of horse, the firmness of infantry; and by daily practice and exercise attain to such expertness that they are accustomed, even on a declining and steep place, to check their horses at full speed, and manage and turn them in an instant and run along the pole, and stand on the yoke, and thence, betake themselves with the greatest celerity to their chariots again."

The chariot and figures are mounted on a pewter base, total weight comes to 2.47 kilos or 5.44 pounds.  Unpacking instructions come with this piece, you are strongly recommended to follow them.  Put simply, the base is heavier than the chariot, pulling the chariot out of the box in an uncontrolled frenzy will leave the display base inside the box and the chariot in your hands; you really do not want this.  In this instance, please take your time and remove each layer of the hard foam, so long as the instructions are followed, you will have an outstanding piece in your collection.