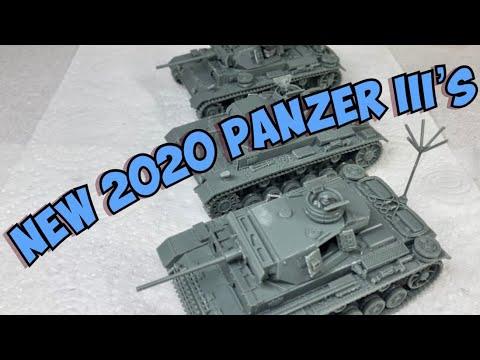 The Panzerkampfwagen III (SdKfz 141), commonly known as the Panzer III, was a medium tank developed in the 1930s by Germany, and was used extensively in WW2. It was intended to fight other armoured fighting vehicles and serve alongside and support the similar Panzer IV which was originally designed for infantry support. However, as the Germans faced the formidable Russian T-34 tanks, more powerful anti-tank guns were needed. Since the Panzer IV had more development potential with a larger turret ring, it was redesigned to mount the long-barrelled 7.5cm KwK 40 gun. The Panzer III effectively swapped roles with the Panzer IV, and from 1942 the last version of the Panzer III mounted the 7.5 cm KwK 37 L/24 that was better suited for infantry support. Production of the Panzer III ceased in 1943. Nevertheless, the Panzer III's capable chassis provided hulls for the Sturmgeschütz III assault gun until the end of the war. A total of 5,774 were produced between 1939 and 1943.

The Panzerbefehlswagen III command tanks were converted from all versions after the Ausf E (roughly one for twelve.) they were characterized by powerful radios and a new redesigned, roomier turret interior. In early production, it featured a dummy main gun which resembled a 3.7cm gun, and later with a mock 5cm gun instead. The turret was bolted in place and had a distinctive frame antenna on the rear deck.

The Ausf J was the first in the series of command tanks based on the Panzer III to retain the tank’s 5cm KwK L/42 main gun. The lack of anything more potent than a machine gun had been a major drawback in the earlier models. The frame antenna was replaced with a set of star-shaped antenna on the rear engine deck. The Ausf L was armed with the long 5cm KwK 39 L/60 gun.