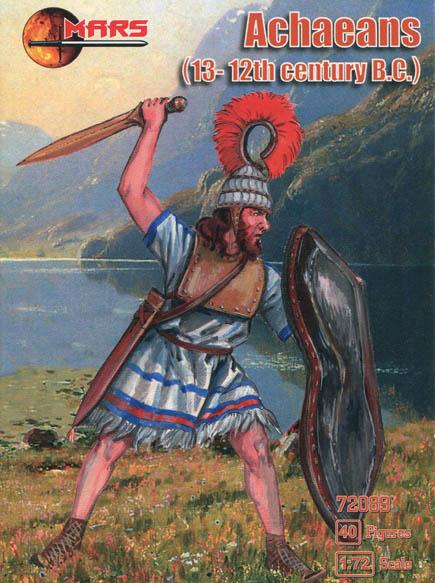 'Achaeans' is the name given by Homer to the Mycenaean-dominated Greeks, and the attributed dates of 13 and 12th centuries BCE means these are warriors from that society in the last two centuries before it went into a sharp decline, perhaps brought on by a 'Dorian invasion' or conflict with the Sea Peoples. Like so many ancient subjects there is much we do not know about this period, although there were doubtless many internal conflicts as well as wars with neighbours, not to mention expeditions further afield such as against Troy or perhaps the Hittite empire.

Evidence for warriors from this period is limited mostly to weapons found as grave goods and some fragmentary depictions on frescos or pottery. From these it has been deduced that early Mycenaean infantry tended to be lightly clothed and armoured, but carried a large shield and long spears to fight in formation, while for the very late Bronze Age, which is what this set deals with, there was much more body armour and generally shorter weaponry with much less emphasis on the shield. Almost all these figures have some sort of body armour, including several cuirasses and some scale corselets, and all have a helmet, mostly of metal although one has the traditional boars-tusk construction. Most of the helmets have some form of plume or crest, and these are very varied, as is all the dress. Under the armour the men wear either kilts or tunics (which reach the knee, so are much longer than the evidence would suggest), and some have a cloak too. Several look to have some form of greave, which could be metal or cloth, and all seem to have shoes, many with the turned up toe characteristic of the time. There is reasonable evidence for all these features, although of course no one can really say which were more typical, but a mixture such as depicted here would seem plausible so we have no accuracy concerns with the clothing and armour.