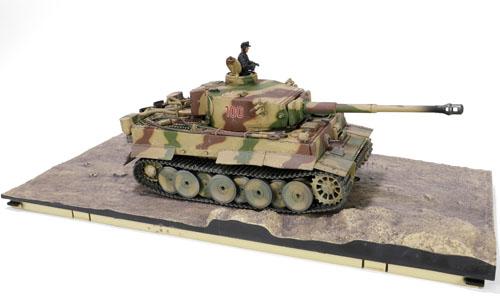 Formed in February 1943, the 505th received several Tigers and the rest in March with 25 Pzkpfw IIIs.  The unit was loaded on rail cars on 29/30 April 1943 and sent to Heeres Gruppe Mitte on the Eastern Front, where it received 11 Tigers that were shipped from the ordnance depot between 8 and 10 June 1943.  It took part in Operation Citadel as part of Feldmarschall Model's 9th Armee.  At the start of the Kursk offensive on 5 July 1943, the unit had 31 Tigers and was joined on 9 July 1943 by 3.Kompanie which was formed in April and received Tigers in June.  The 505th lost only four Tigers during the Kursk offensive, but lost a further six by the end of July 1943.

Production of the Tiger began in August 1942, and by August 1944 1,355 of these tanks had been built.  The 88mm main gun was the most powerful anti-tank gun in use by any army.  The superior mobility of Allied tanks allowed them to attack from behind or from the side in the hope of taking a Tiger down.  The influence of Tiger tanks on allied morale grew to almost mythical proportions, and was known as "Tigerphobia."  Tigers destroyed tremendous amounts of enemy equipment and often just the sight of a Tiger would induce the Russian tankers to withdraw.