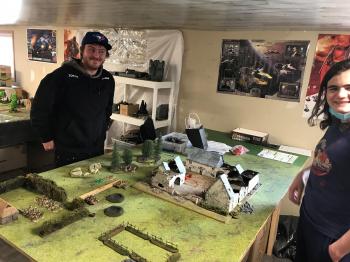 Preregister with GM to reserve a spot, receive updates and allowances for unit specific information. Tables will be setup, and could be any theater.  Expect tables of various terrain density and type.

Prizes will be awarded for Best General, Bad Day At War, Best Sportsman, and Best Painted.

One medium tank with an armor value 8+, and costing less than 300 points allowed.  One flamethrower per list.  This force may come from the Core 2nd Edition Rule book or from one of the Armies of books. Units can be taken from the Campaign books. There will be three custom missions presented the morning of game day. 2nd Edition Bolt Action Rules as written and the latest FAQ. If you are a new player, come out with what you have assembled and give the game a try.

The match-ups of Game 1 will be random. In the following games players will be matched using Tournament Points (TP) and Casualty points.  The winner is determined at the end of the last round, according to the following criteria: • The player with the highest Tournament Points total is the winner. • In case of two players tying for number of TPs, the winner will be the player with the highest Casualty points caused total. • In case of same Casualty points total, if the tied players have played each other during the course of the tournament, then the winner will be the winner of such match. • If the players never met in the tournament, the tournament ends with a joint victory and the players share the first prize.