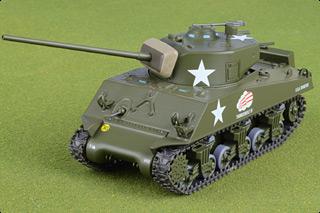 By all accounts, the M4 Sherman medium tank was regarded as the workhorse of the US Army during World War II.  In fact, virtually all of the Allied armies employed the Sherman in their armed forces, including the British, who developed an upgunned variant called the "Firefly".

Eleven different U.S. plants manufactured six basic models of the Sherman, and by June 1944 over 49,234 battle-ready vehicles had been produced.  While it was no match for the German Panther or Tiger tanks, the Sherman soldiered on, using its weight in numbers to wrest control of Europe from the Wehrmacht.

This particular 1:43 scale replica of an U.S. M4A3 Sherman medium tank was commanded by Creighton Abrams and nicknamed "Thunderbolt", which was attached to the 37th Tank Battalion, 4th Armored Division, then deployed to Bastogne during December 1944.