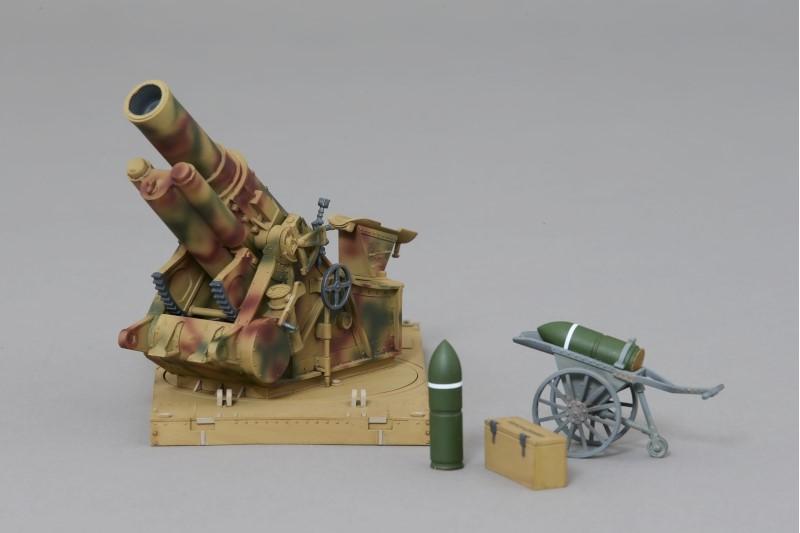 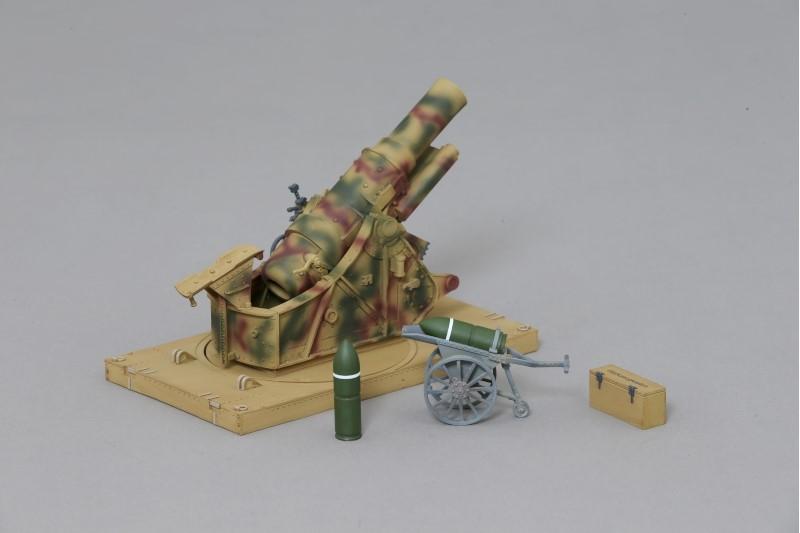 The WWII variant of our previously released Skoda Howitzer, but this time in a very nice three-tone camouflage colour scheme.

The Skoda 30.5 cm Mörser M.11 was a siege howitzer produced by the Skoda Works and used by the Austro-Hungarian Army during World War I and by Germany in World War II.  Development began in 1906, when a development contract was placed by the Austro-Hungarian high command with Skoda-Werke in Pilsen to develop a weapon capable of penetrating the concrete fortresses being built in Belgium and Italy.  Development work continued until 1909, when the first prototype was finished and in 1910, fired secretly in Hungary.

The weapon was able to penetrate 2m (6 ft 7 in) of reinforced concrete with its special armour-piercing shell. The weapon was transported in three sections by a 100-horsepower 15 ton Austro-Daimler road tractor M.12.  It broke down into barrel, carriage and firing platform loads, each of which had its own trailer.  It could be assembled and readied to fire in around 50 minutes.

The mortar could fire two types of shell, a heavy armour piercing shell with a delayed action fuse weighing 384 kg, and a lighter 287 kg shell fitted with an impact fuse.  The light shell was capable of creating a crater 8 metres wide and 8 metres deep, as well as killing exposed infantry up to 400m (440 yd) away.

The weapon required a crew of 15–17, and could fire 10 to 12 rounds an hour.  After firing, it automatically returned to the horizontal loading position. The Ministry for War placed an order for 24 of the new wonder weapons.

Eight Mörsers were loaned to the German Army and they were first fired in action on the Western Front at the start of World War I.  They were used in concert with the Krupp 42 cm howitzer to destroy the rings of Belgian Fortresses around Liege (Battle of Liege), Namur (Fortified Position of Namur) and Antwerp (Forts Koningshooikt, Kessel and Broechem).  In 1915, ten howitzers were used in support of the Austro-Hungarian-German invasion of Serbia under the German General August von Mackensen.  By the end of the war, 79 of the weapons of all three types were in service.  In 1939, Germany seized all 17 pieces from Czechoslovakia and repaired the howitzer from the Arsenal Museum, designating them 30.5 cm Mörser (t). In 1941, they obtained five more weapons after the defeat of Yugoslavia and placed them into service as the 30.5 cm Mörser 638(j).  They saw service against Poland, France, and the Soviet Union in World War II where they served with Heavy Artillery Battalions (schwere Artillerie-Abteilungen) 624, 641, and 815 as well as two Heavy Static Artillery Batteries (schwere Artillerie-Batterie bodenstandig) 230 and 779.

This 1/30 scale Howitzer comes with ammunition trolley, tool box, and two other spare shells to create a great diorama piece all on its own.  The majority of this model is made from resin to save on weight with some metal parts.  Barrel will elevate up and down and howitzer will traverse on its base.

In the future, Crew figures will be released for the howitzer and will be suitable for WWI and WWII.  The German artillery figure shown in the attached photos is for scale comparison purposes only.