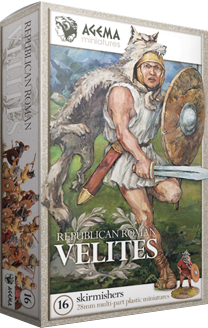 The early Roman army suffered from having poor light infantry, the leves struggling against the very capable Carthaginians and their allies. It is thought the leves were upgraded with shields and swords to become Velites around 211 BC, when they improved Roman fortunes.

Bases are not included. Figures are supplied un-assembled and unpainted.