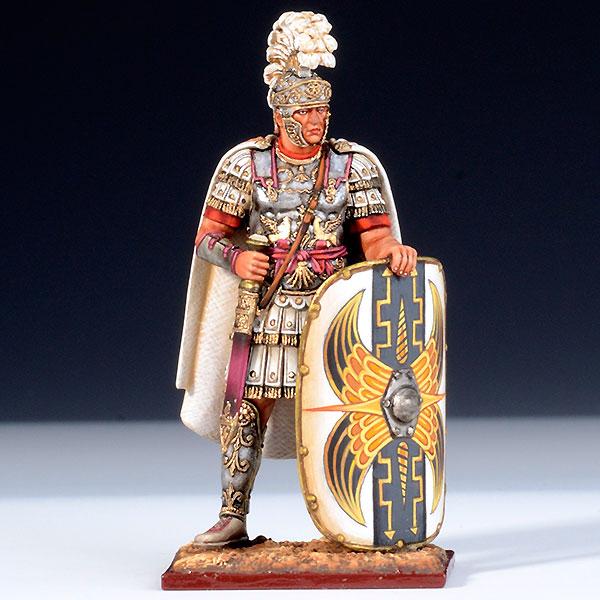 Pompey the Great in Triumph Armor

One of Rome’s greatest political and military leaders, called Magnus (the Great), Pompey played a major role in the later days of the Roman Republic.  Son of Pompeius Strabo, a wealthy landed Italian provincial, Pompey’s first noted appearance was in 83 BCE in the service of Sulla.  Having organized an army for Sulla in Picenum, he won many battles and became Propraetor to Sicily and Africa where he successfully defeated Rome’s enemies.
On returning to Rome, Pompey helped stamp out the remnants of the Spartacus slave revolt in 71 BCE.
With strong public support, Pompey was given a commission by the senate to rid the Mediterranean Sea of the pirates that had become a powerful impediment to Rome’s commerce.  With skill, speed, and efficiency, Pompey eliminated the pirate menace within six months.
Pompey was next given command in the East where he defeated the army of Mithridates of Pontus and Tigranes of Armenia.  He went on to consolidate Roman control of Asia-minor (66 – 62 BCE).
His successful reorganization of the Eastern lands led many of the aristocrats in the senate to view him as too ambitious and too wealthy.  Sensing problems with the senate, Pompey entered into a political alliance with Crassus and Caesar forming the First Triumvirate and marrying Caesar’s only offspring, a daughter Julia.  The arrangement began to fray when Pompey was unable to maintain his principal status given Caesar’s continuous string of victories in Gaul.  The Triumvirate was dissolved with the death of Julia and the death of Crassus, along with annihilation of his army at Carrhae.
Pompey then married the daughter of aristocrat Metellus Scipio, which allied him with the aristocrats in the senate who opposed Caesar.  They were prepared to strip Caesar of his legions and political standing.
When Caesar entered Italy with his legions, civil war began. Officially it was a confrontation of the Republic against Caesar. Realistically, Pompey was dueling with Caesar for control of Rome.
Pompey and most of the senate fled to Brindisium ahead of Caesar’s arrival and proceeded to Ilyria.  In 48 BCE a major battle took place at Dyrrhachium with Pompey having the larger army.  Pompey failed to win that battle and the two sides met again at Pharsalus. The Pompeians were routed by Caesar’s superior legions and Pompey fled to Egypt where he was murdered.
Pompey was an outstanding administrator as well as a capable, resourceful, and determined general in his early career although his campaign against Caesar was lackluster and uncertain.  Nonetheless, Pompey the Great was one of the four greatest figures of the late Roman Republic along with Marius, Sulla and Caesar.