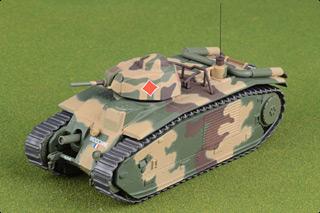 The Char B1 had its origins in the concept of a Char de Bataille conceived by General Jean-Baptiste Eugene Estienne in the twenties.  On January 27th, 1926, it was decided to build three prototypes of a Char B, based on four earlier experimental vehicles (a FAMH-model, the FCM 21, the SRA and the SRB).  Finished in 1930, these prototypes were again extensively altered to meet changes in specifications, outlining the concept of a Char de Manoeuvre.  Neither Char de Bataille nor Char de Manoeuvre are official type designations; they refer to the tactical concepts only.  The "B" in Char B does not refer to Bataille.

On April 6th, 1934, the first order was made for seven tanks of a Char B1.  The "B1" refers to the fact that there were other simultaneous projects to develop improved types: the Char B2, B3 and B B.

The Char B1 was manufactured by several firms: Renault (182), AMX (47), FCM (72), FAMH (70) and Schneider (32).  Although it was the main producer, Renault had not exclusively designed the tank.  Therefore, the official name was not Renault B1 as often erroneously given.  It was a very expensive tank to build:  the per unit cost was about 1.5 million French francs.

In France, at the time, two schools of thought collided:  the first wanted to build very strong heavy tanks, the other a lot of cheap light tanks.  Both sides managed to influence procurement policy to the end that not enough tanks were built of either category, to the exasperation of men like Colonel Charles de Gaulle who wanted to build more of the medium Char D2, with a third of the cost of the Char B1 bis, but armed with the same 47 mm gun.

Pictured here is a 1:43 scale replica of a French Char B-1 heavy tank that was attached to 3e Compagnie, 15e Batallion, and fought during the Battle for France in May 1940.