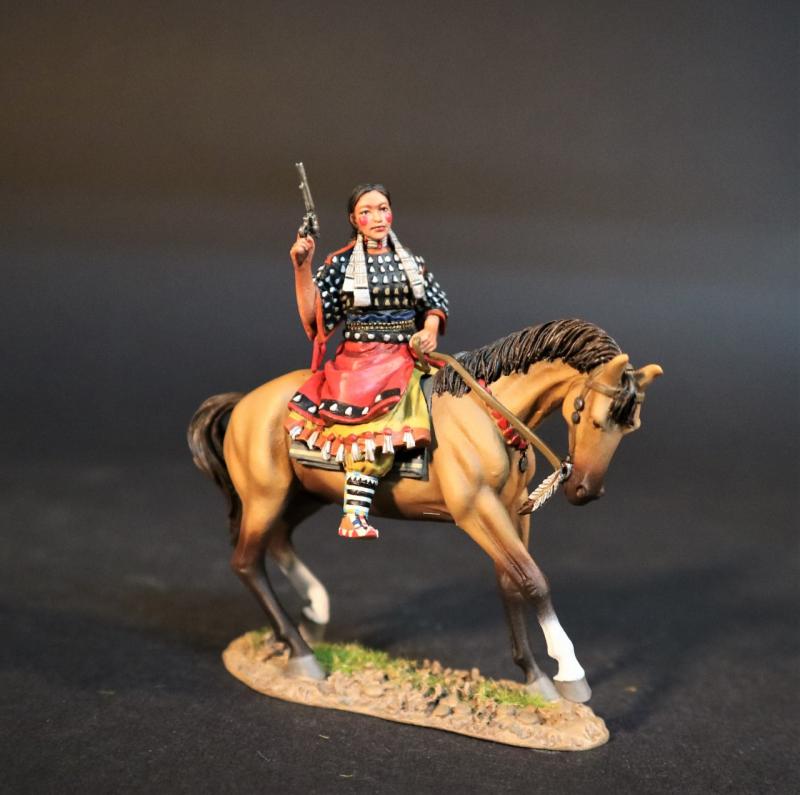 THE BATTLE WHERE THE GIRL SAVED HER BROTHER, 17th JUNE 1876

The Cheyenne named, the more commonly known The Battle Of The Rosebud, The Battle Where The Girl Saved Her Brother.  This was because of an incident during the fight involving the Cheyenne woman Buffalo Calf Road Woman, and her brother Chief Comes In Sight.

The battle took place on June 17th 1876 in the Montana territory between the United States Army and its Crow and Shoshoni allies against a force consisting mostly of Sioux and Cheyenne Indians.  Led by Crazy Horse, the Sioux and Cheyenne managed to halt the offensive of General George Crook, untill August.

Under the leadership of Crazy Horse, the Cheyenne and Lakota Sioux had been skirmishing with the United States forces.  Many warriors had charged, and one man who had the best horse was in the lead.  This was Chief Comes In Sight.  Before he could reach the soldiers, his horse was wounded and its hind leg broken.  The Cheyenne retreated leaving Chief Comes In Sight on foot in the battlefield.  As he was walking away with all the soldiers shooting at him, Buffalo Calf Road Woman rode out onto the battlefield at full speed and grabbed up her brother, carrying him to safety.  Her courageous rescue caused the Cheyenne to rally, and they defeated General George Crook and his forces.

In honour of this brave deed, the Cheyenne named the battle, “The Battle Where The Girl Saved Her Brother.”

The battle which ensued would last for six hours and consisted of disconnected actions and charges and counter-charges by Crook and Crazy Horse, the two forces spread out over a fluid front three miles wide.  The Lakota Sioux and Cheyenne were divided into several groups as were the soldiers as the battle progressed.  The soldiers could fend off assaults by the Indians and force them to retreat but could not catch and destroy them

The soldiers were impressed with the swarming Indians.  "They were the best cavalry soldiers on earth. In charging up toward us they exposed little of their person, hanging on with one arm around the neck and one leg over the horse, firing and lancing from underneath the horses' necks, so that there was no part of the Indian at which we could aim."

By the standards of the usual hit-and-run raids of the Plains Indians, the Battle of the Rosebud was a long and bloody engagement.  The Lakota and Cheyenne fought with persistence and demonstrated a willingness to accept casualties rather than break off the encounter.  The delaying action by Crook's Indian allies during the early stages of the battle saved his command from a devastating surprise attack.  The intervention of the Crow and Shoshoni scouts throughout the battle was crucial to averting disaster for Crook.

Crook claimed victory by virtue of occupying the battlefield at the end of the day, but his actions belie his claim.  Concerned for his wounded and short on supplies, Crook retraced his steps to his camp on Goose Creek, near Sheridan, Wyoming, and remained there immobile for seven weeks awaiting reinforcements.  He would play no role in the Battle Of Little Big Horn, eight days later.  Crook's Crow and Shoshoni allies left the army for their homes shortly after the battle.  The Lakota and Cheyenne returned to the battlefield after Crook's departure and piled up rocks at the location of key events in the battle.  Some of the rock piles they built are still there

Buffalo Calf Road Woman, or Brave Woman (c. 1844-1879) was a Northern Cheyenne woman who saved her wounded warrior brother in the Battle of the Rosebud, in 1876.  Her rescue helped rally the Cheyenne warriors to win the battle.  Later that same year she was to fight alongside her husband in the battle of the Little Bighorn.  She was later credited with striking the blow that knocked Lieutenant Colonel George Armstrong Custer off his horse before he died.