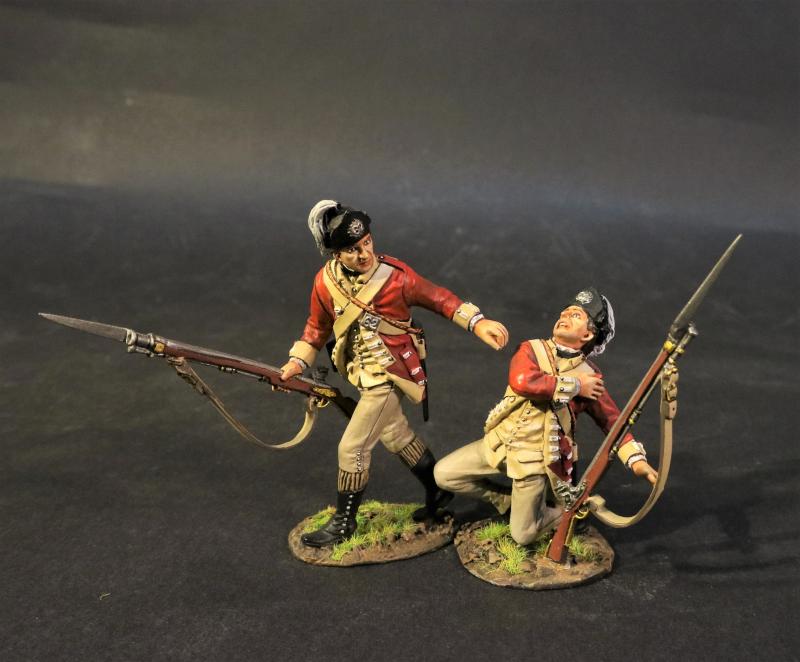 2 Infantry Wounded, The 62nd Regiment of Foot, the Anglo Allied Army, The Battle of Saratoga, 1777, Drums Along the Mohawk

The 62nd Regiment of Foot was an infantry regiment of the British Army, which was raised in 1756 and saw service through the eighteenth and nineteenth centuries.  Under the Childers Reforms, it amalgamated with the 99th (Lanarkshire) Regiment of Foot to form the Wiltshire Regiment in 1881.

In October 1756, a second battalion to the 4th Regiment of Foot was formed as part of measures to strengthen the army at the start of the Seven Years' War with France.

In January 1758, four companies of the 2nd/4th Regiment embarked at Plymouth as Marines under Major T. Hardy in five ships of Admiral Boscawen's fleet, while Battalion Headquarters and the remaining companies stayed at Plymouth.  The fleet sailed for Halifax, Nova Scotia, the base for a seaborne attack on French Canada. However, on 21 April while the fleet was part way across the Atlantic came news of a change of name following an official decree that the new second battalions throughout the Army would be numbered as separate regiments.  Under this re-organisation, the 2nd/4th Regiment became the 62nd Regiment of Foot.

Throughout the Canadian campaign, the 62nd continued to serve as Marines, providing landing parties, manning ships' boats, putting artillery pieces ashore, and providing local protection for them.  During this time, the Regiment won its first Battle Honour 'Louisburg' in 1758, but it was not awarded until 152 years later.  The reason for this was that, since they were employed on board ship, the men were on the strength of the navy, not the army, so that at the time the War Office stated they had no record of the Regiment's participation!

The Regiment was still in Ireland when fighting broke out near Boston between the Colonists and British troops and an American force set out to conquer Canada in 1775.  The 62nd sailed for Quebec the following year.  The Regiment acted as Light Infantry and were involved in the advance from Canada into the rebel New England colonies under General Burgoyne.  They won great praise for their steadfastness and fortitude in a number of actions.

Brigadier Fraser, with the British Right Wing, pushed into the woods along the northern side of a deep ravine.  Hamilton followed him with the British Centre, accompanied by Burgoyne.  Riedesel and his German troops remained on the riverside with the boats and supplies.  Once in a line, the three contingents would advance on the Americans.

Gates had no aggressive plan with which to counter the British move.  He planned to await attack in his fortified position on Bemis Heights.  His subordinate, Arnold, had no such intention.  He was determined to take the fight to the advancing British and use the advantage his men had in forest fighting.

Arnold pressed Gates to attack with the whole army. Gates refused, but finally agreed that Arnold could take his own division forward against the British line.

Morgan’s riflemen were the first American troops to attack, launching an assault on a small force of Canadians and Indians of Fraser’s Right Wing.  Morgan’s men were followed by Arnold’s division of New Hampshire Continentals.

As the Canadians and Indians fell back, Morgan’s riflemen rushed on in pursuit and were dispersed by a British counterattack.

The New Hampshire Continentals were repelled by Fraser’s Grenadiers and Light Companies.

Burgoyne’s and Hamilton’s Centre approached Freeman’s Farm, leaving a substantial gap between themselves and Fraser’s more distant force.  Arnold rallied his men and resumed the attack into the gap between the British Centre and Right Wing.

More American regiments from Arnold’s Division came up and joined the assault. Burgoyne’s flank regiment, the 21st Foot, was forced to fall back to avoid being overwhelmed.  This left the 62nd Regiment at the angle of the line and under heavy fire.

A desperate battle developed between the attacking Americans and the regiments of the British Centre.  During this fighting, which was described by veteran British soldiers as very heavy, General Phillips led a bayonet charge of the 20th Regiment, to enable the 62nd to withdraw and re-organise.

Gates, still in the American position on Bemis Heights, refused to commit further formations of the American army to the battle.  If he had done so, it is generally accepted that the British Centre would have been overwhelmed.

In contrast to Gates’ refusal of requests for assistance from Arnold, Riedesel on the British Left responded with alacrity to the crisis.  Leaving the British 47th to guard the baggage, Riedesel marched his regiments up the hill.  He arrived to find the British Foot in great difficulty, and, without delay, launched a flank attack on the American troops.  The fire of his artillery and foot was sufficient to relieve the pressure on the British regiments and force the Americans to withdraw.  By this time, night was falling.

The Americans fell back in some confusion to their fortified camp on Bemis Heights.

At the battle of Freeman's Farm in the Saratoga campaign of 1777, the losses were so heavy that at the end only five officers and 60 men of the 62nd were fit for duty.  Lack of reinforcements and supplies eventually caused General Burgoyne to surrender and the remaining members of the 62nd were taken prisoner.  By 1780 most of the officers had been exchanged and were back home but few of the men ever saw England again.