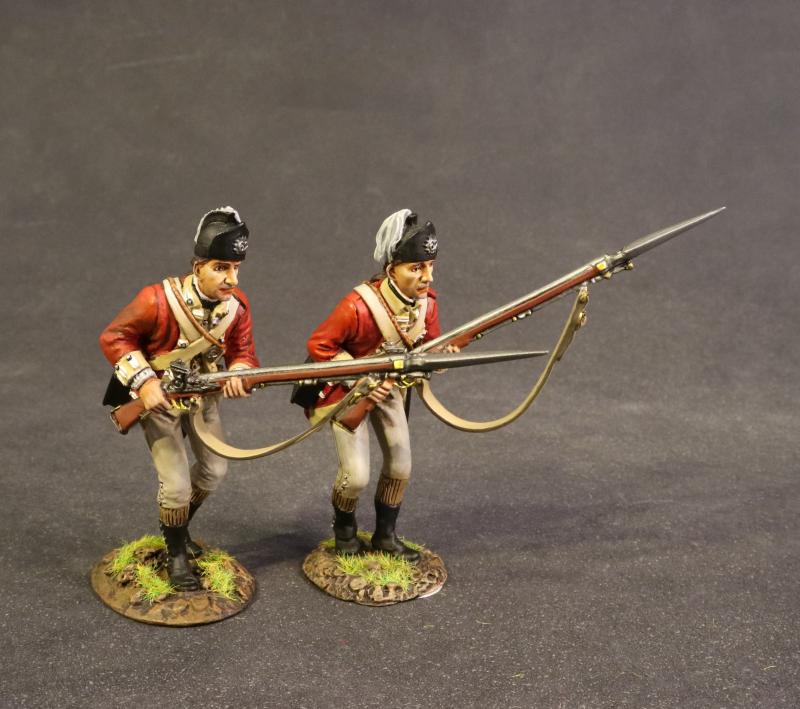 Two Infantry Advancing, The 62nd Regiment of Foot, the Anglo Allied Army, The Battle of Saratoga, 1777, Drums Along the Mohawk--two figures--RETIRED--LAST ONE!!
$82.00

2 Infantry Advancing, The 62nd Regiment of Foot, the Anglo Allied Army, The Battle of Saratoga, 1777, Drums Along the Mohawk

The 62nd Regiment of Foot was an infantry regiment of the British Army, which was raised in 1756 and saw service through the eighteenth and nineteenth centuries. Under the Childers Reforms it amalgamated with the 99th (Lanarkshire) Regiment of Foot to form the Wiltshire Regiment in 1881.

In October 1756 a second battalion to the 4th Regiment of Foot was formed as part of measures to strengthen the army at the start of the Seven Years' War with France.

In January 1758 four companies of the 2nd/4th Regiment embarked at Plymouth as Marines under Major T Hardy in five ships of Admiral Boscawen's fleet while Battalion Headquarters and the remaining companies stayed at Plymouth. The fleet sailed for Halifax, Nova Scotia, the base for a seaborne attack on French Canada. However, on 21 April while the fleet was part way across the Atlantic came news of a change of name following an official decree that the new second battalions throughout the Army would be numbered as separate regiments. Under this re-organisation the 2nd/4th Regiment became the 62nd Regiment of Foot.

Throughout the Canadian campaign the 62nd continued to serve as Marines, providing landing parties, manning ships' boats, putting artillery pieces ashore and providing local protection for them. During this time the Regiment won its first Battle Honour 'Louisburg' in 1758, but it was not awarded until 152 years later. The reason for this was that since they were employed on board ship the men were on the strength of the navy, not the army, so that at the time the War Office stated they had no record of the Regiment's participation!